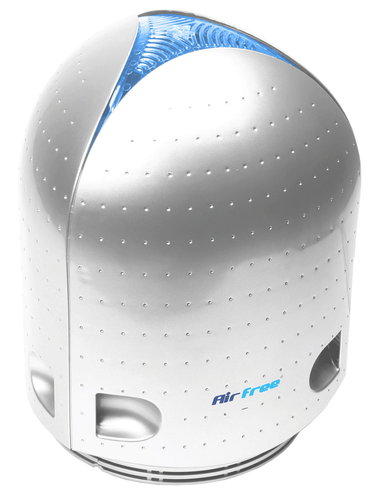 February 2009 heralds the launch of AirFree®, a revolutionary new device that is clinically proven to reduce airborne irritants that trigger allergies including asthma attacks which cause 1,400 deaths per year in the UK.(1)

According to Asthma UK, 5.4 million people currently receive treatment for asthma including 1.1 million children, affecting one in five UK households. Common triggers are micro-organisms such as: dust mites, mould and fungi, viruses, pet dander and other airborne pollutants.

AirFree® is a portable unit that uses a unique convection process (2) to draw surrounding air into a special chamber where it heats the air safely to 200 degrees and incinerates airborne micro-organisms. Once the micro-organisms have been removed, the air is returned to the atmosphere at room temperature for easier breathing.

Clinical studies held in six countries where AirFree® was run continuously over a period of 4-6 weeks in rooms with both open and closed windows, and with and without air conditioning show that:

Dr Samways is a medical doctor specialising in allergy problems. She takes a holistic approach in treating patients and has herself used Airfree for the last six years to help alleviate her own mould allergy. She says: “I have found Airfree to be effective in removing particulate allergens from household air and therefore helpful in reducing triggers to a range of common allergies.

“Airfree is one of the few devices that really seem to lower the number of mould spores and other allergens that, because they are so minute, can often be merely re-distributed rather than eliminated from household air by various existing filter products on the market.”

AirFree® uses less electricity than a 50W light bulb and works fast to start reducing pollutants from just 15 minutes after it has been plugged in. It is silent and contains a dimmer controlled anti-stress light making it ideal for children’s rooms where a night light is useful.

1. Dr Diana Samways qualified in Medicine from the Royal Free Hospital and worked in General Practice. She now runs a holistic medical practice in Haslemere Surrey with a particular interest in IBS, Candida and allergies including moulds; depression, anxiety and the connection between allergy and addiction. Dr Samways is an entertaining public speaker on holisitic health topics. Her popular book: “I’m a Patient…Get me out of Here…” is available from www.allergydoctor.org.uk. Dr Samways is independent and does not benefit financially from sales of Airfree.