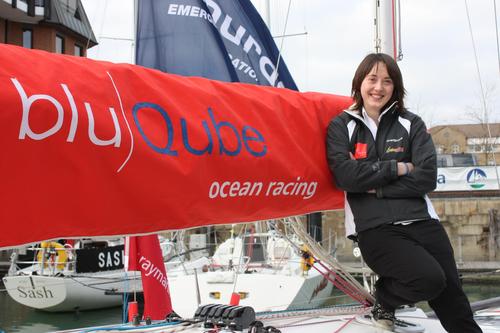 Bristol, UK, 2nd March 2009 – bluQube, a leading vendor of financial management software, is to become the title sponsor for Katie Miller, one of the UK’s most promising young solo sailors. A formal announcement of the sponsorship was announced on Friday at the Royal Southampton Yacht Club with the christening of Katie’s boat as ‘bluQube’ by guest sailing legend Dee Caffari, who recently finished 6th in the Vendee Globe.

The two year partnership will oversee Katie’s entry as the youngest ever female competitor in the 2009 OSTAR single-handed Trans-Atlantic race, which starts in Plymouth on 25th May 2009, and her inauguration into the Figaro European Championships in 2010.

Simon Kearsley, CEO at bluQube, comments, “We have been involved in sailing sponsorship for over four years now, supporting ventures such as The Global Challenge and most recently solo sailor Steve White who has just completed the Vendee Globe. We have seen some huge returns from sailing sponsorship and are really excited at the prospect of helping one of the UK’s most aspiring young yachtswomen who has already created an enviable reputation for herself within the solo sailing community.”

bluQube’s Simon Kearsley adds, “Our support for Katie is an opportunity to continue with the type of marketing initiatives that in the past have delivered an incredible return on investment. We first met Katie during the bluQube Solo 1000 last May and our whole team was overwhelmed both by Katie’s positive attitude and the results she achieved.” Katie came first in the 1,000 mile race despite the fact that previously the furthest she had sailed solo in a single trip was 90 miles.

Simon Kearsley concludes, “We feel that Katie is a great fit with our own values because of her determination, dedication and pragmatic approach. Not only does the sponsorship give us something different to talk about besides accounting software, which can often be perceived as quite a dry subject, it is also a sport that appeals to a large proportion of our target market - senior decision-making professionals from medium to large sized companies. We wish Katie all the best in the OSTAR and both our customers and staff look forward to supporting and tracking her progress”.

Katie Miller commented on the sponsorship deal, “I am so thrilled that bluQube have come onboard as title sponsor. From the moment I met them, during the bluQube Solo 1000, I was overwhelmed by their support and enthusiasm for the event.

bluQube is a dynamic company, a profile that fits perfectly with the Katie Miller Yacht Racing image. Their support for solo sailors is already proven, and I am looking forward to a successful campaign representing them.”

The company will be producing a monthly blog on Katie’s sailing adventures which will be available via the bluQube website (www.bluQube.co.uk).

The launch event was sponsored by Mount Gay Rum. Other sailing celebrities who were in attendance included Dame Ellen MacArthur.

Katie was awarded the YJA Raymarine Young Sailor of the Year Award at the London Boat Show in 2007 in recognition of her solo circumnavigation of the United Kingdom that raised £10,000 for the Ellen MacArthur Trust.

Last year she competed in, and won, her first major single-handed race, the “bluQube Solo 1000” which was the official qualifier for the OSTAR.

Katie’s ultimate ambition is to take part in the 2016 Vendee Globe following in the footsteps of Ellen MacArthur, Dee Caffari & Sam Davies.