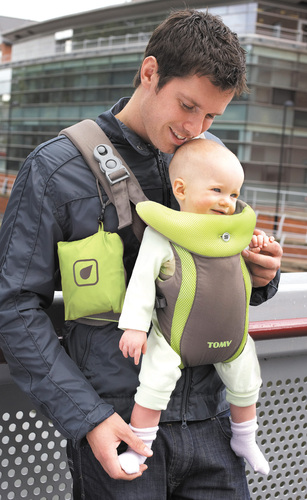 The search is on to find the UK’s most devoted new dad.

The search is on to find the UK’s most devoted new dad.

Calling all new dads! To mark the launch of the new Tomy Freestyle All Seasons Baby carrier, Tomy has teamed up with leading parenting magazine, Prima Baby, to launch a nationwide search for the UK’s most devoted Dad, a real life role model who has really bonded with his baby and is involved in all aspects of parenting from nappy changing and 3am feeds to walks in the park with baby up close and snug in a carrier.

The campaign, which launches the week after Chris Evans joined the ranks of Brad Pitt, David Beckham, Jamie Oliver, Jude Law, Jonathan Ross and Chris Martin and other fathers in the spotlight, celebrates the role of great dads in developing secure and happy children.

As an inspirational role model, the Tomy Dad of the Year overall winner will be offered the opportunity to act as a media spokesperson for Tomy’s Freestyle baby carriers range. He will also win the fantastic prize of a luxury weekend break with spending money at a Mr. and Mrs. Smith hotel of choice, the stylish new Tomy Freestyle All Seasons Baby carrier and a hamper of pre-school toys from Tomy.

Dads or their proud partners, parents or friends, simply need to visit Tomy Dad of the Year or pick up a copy of the March issue of Prima Baby to submit an entry form by 15th March 2009 with their story; whether he delivered his baby himself, put his career on hold to stay at home or simply loves taking his share of responsibilities and spending time with his baby.

Tomy Freestyle Carrier range is the result of extensive consumer research alongside development with leading back and posture experts at the Anglo European Chiropractic College, providing ultimate comfort for parent and baby. It comes in a range of unisex designs, so dads can wear it with confidence knowing their image and baby are both in safe hands.

The Tomy Freestyle baby carrier range includes the Classic Carrier, £27.99 GRP; the Premier Carrier, £39.99 GRP, now available in Blue/Gray and new Red/Black design; and the Premier Detachable Carrier, £49.99 GRP. The new Tomy Freestyle All Seasons Carrier has a breathable fabric and an all-weather cover so parents and baby can get out what ever the forecast predicts. It is available from May 2009 at £54.99 GRP.

Joanne Gray, European Business Head for Tomy Nursery comments: ‘We know dads love to get out and about with their babies to proudly show them off to the world. It’s incredibly rewarding to bond in the early days, weeks and months of a child’s first year and getting out and about with your baby in a carrier is a great way for fathers, who can’t always be involved in bath time or feeding, to do this. We have launched the Dad of the Year competition to honour ordinary doting dads with some star treatment and inspire other fathers to enjoy proudly parading their new baby at the same time.’

Elaine Griffiths, Editor of Prima Baby magazine said: ‘Thanks to the all the recent pictures of proud celebrity dads snapped carrying their baby, carriers have real kudos – they’re almost the ‘it bag’ equivalent for men. And what a positive trend – with bonding benefits well documented, the more fathers who get out and about and up close with their babies, the better.’