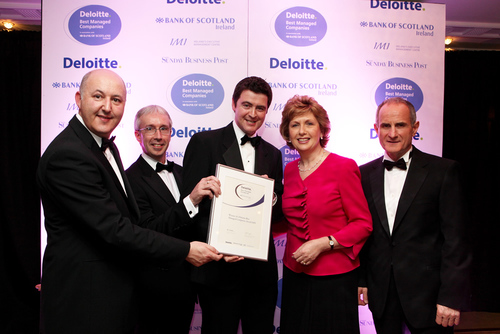 Dublin, Ireland, March 6th, 2009 – Kainos, (www.kainos.com) a leading IT consulting company, had today announced that it has been named as one of Ireland’s ‘Best Managed’ companies in the Deloitte Best Managed Companies Awards. The winning companies were recognised at an awards Gala dinner in the Ritz Carlton, Powerscourt, which was attended by President McAleese, on 27th February 2009.

The Deloitte Best Managed Awards programme, in association with Bank of Scotland (Ireland), recognises indigenous companies across the island of Ireland which are operating at the highest levels of business performance. It is the only awards programme that considers companies from every perspective including strategy, capability, commitment, financials and growth potential across all key functions of the business.

Commenting on the award, Brendan Mooney, Managing Director at Kainos said: “We are delighted to be honoured as one of Ireland’s best companies. Our performance over the last twelve months is attributable to a combination of outstanding employees, a relentless focus on customer service and projects that deliver real return on investment.”

Pat Cullen, Managing Partner, Deloitte commented: “The tremendous success of the winning companies is an inspiration for all Irish companies. We are delighted to be able to recognise these strong business leaders of the future, who embody the immense talent across the island of Ireland.”

Paul Cunningham, Head of Banking, Bank of Scotland (Ireland) and judging panel member said: “The Best Managed Companies have shown great focus and dedication in what has been a difficult year for us all. 2009 will be just as tough for business, but, the strong management capability which these companies have already demonstrated means they will be well positioned to trade through this challenging cycle.

Kainos designs and implements IT solutions that make businesses perform better. The company was founded in 1986 and is headquartered in Belfast with offices in Dublin, London and Gdansk. Kainos employs over 260 consultants and it prides itself on the quality of its people; client focused, reliable, dedicated and they understand how technology can be used to its best advantage. Kainos’ customers include some of the biggest names in both private and public sector throughout the UK and Ireland, including AIB, the Audit Commission, Shipowners, Bank of Ireland, Hibernian, Northern Ireland Civil Service, the Information Commissioners Office and permanent tsb. For more information, see www.kainos.com.

Launched in April 2008, the Deloitte Best Managed Companies programme, in association with Bank of Scotland (Ireland), has been developed to promote and recognise excellence in Irish owned and managed companies. It is the only awards scheme on the island of Ireland that considers a business’ performance from every perspective. Entrants to the programme will compete for this designation in a rigorous and independent process that evaluates the calibre of their management abilities and practices.

Programme sponsors include Back of Scotland (Ireland), the Irish Management Institute and the Sunday Business Post. For further information, visit www.deloittebestmanaged.ie.

The Best Managed Companies Programme originated in Canada in 1993, where it has been run successfully ever since and is the country’s leading business awards programme. Ireland is the third country to run the programme following the launch of the awards in The Netherlands in 2007.