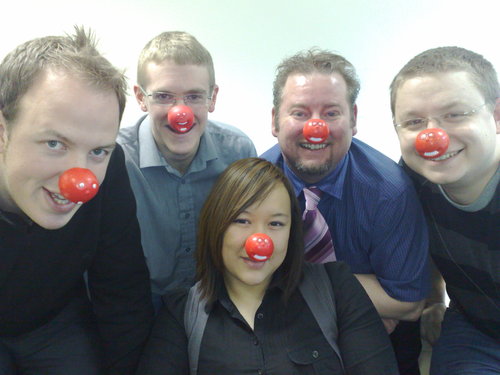 Tonight on BBC1 at 9.00pm a star-studded line up of celebrities will be facing Sir Alan Sugar, for Comic Relief 2009. The girls’ team consists of Ruby Wax, Carol Vorderman, Patsy Palmer, Fiona Phillips and Michelle Mone. On the boys’ team, Jack Dee, Jonathan Ross, Alan Carr, Gok Wan and Gerald Ratner will be joining forces in a bid to win the first stage of the special two part Comic Relief Show… Sparks are bound to fly.

So that millions of fans of the series can have their say about the candidates, and importantly who Sir Alan should point at, and berate in his usual dulcet tones and subtle manner… the website search engine optimisation (SEO) and technical team at 1Job.co.uk have launched their ‘The Apprentice’ blog and forum website.

The site is already at the No.1 position for the term “The Apprentice Blog” out of 1,060,000 results on Google.

Will, Jonathan Ross be banned again? Will Gerald Ratner “do a Ratner”? Will Ruby Wax lyrical?... visit the blog and forum at: www.theapprenticeforum.co.uk. Donations to Comic Relief can be made there. You can also Twitter at: www.twitter.com/theapprenticeuk.

1Job.co.uk is the No.1 job search engine in the UK (Hitwise Employment and Training websites award 2008) and lists over 300,000 jobs each day; and sending over 1 million candidates to jobs shown on the internet each month.

In March, 1Job.co.uk’s proven website optimisation team are offering recruitment advertising sites that list over 100 vacancies a free SEO and candidate usability appraisal of their website, and a free trial of 1Job’s award-winning candidate referral, pay-for-performance service. To apply for the free appraisal and trial, go to: www.1Jobtrial.co.uk now.

The final of the Comic Relief show is on BBC1 at 10.35pm on Friday. If you want to find out when Series 5 of ‘The Apprentice’ properly starts… which is very soon... then visit the blog for the latest information.

The 1Job, the UK's No.1 Jobs Search Engine (source Hitwise), displays over 300,000 job opportunities each day. Over 1000,000 candidate referrals are sent to the job sites it lists each month. The business is operated by Direct Recruit Ltd, Swindon, Wiltshire. The search engine technology and algorithms were custom built in the UK and offer a unique job searching system for job hunters and a unique job advertising and traffic acquisition system for job advertisers in the UK and Ireland.