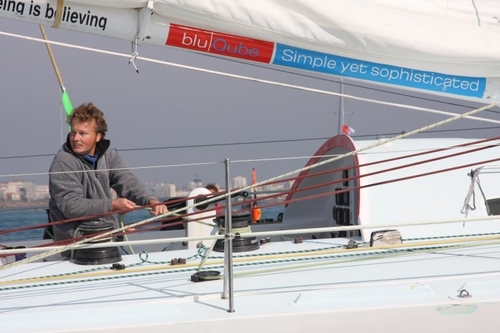 Bristol, UK, 12th March 2009 – bluQube, a leading vendor of financial software is delighted to welcome back Steve White who returned to the UK yesterday after celebrating his 8th place finish in the Vendee Globe in les Sables d’Olonne, France. After providing financial support for Steve for the last two years, bluQube’s CEO Simon Kearsley, who was there to welcome Steve and help helm the boat to port, commented, “We are incredibly proud of how well Steve has done against all the odds and against a field of boats that were technically far more superior on paper. To finish what has been one of the most treacherous Vendee Globes in history was one thing, but to secure a top 10 position is testament to Steve’s tenacity, sailing talent and sheer strength of character.”

Of the 30 boats that entered the Vendee Globe only 11 survived (two yet to finish) and an amazing 4 British sailors were among the finishers including Steve White, Brian Thompson, Sam Davies and Dee Caffari.

Kearsley continued, “Both our staff and customers have been avidly following Steve’s progress over the last four months and have been hooked by his entertaining blogs. We wish him all the best for the future and his ambition to take part in next Vendee Globe in 2012.”
Steve White endured a multitude of weather systems during the trip including 60 knot storms, intense heat and the frustration of little or no wind both in The Doldrums and then in the Bay of Biscay on his return to port.

Steve recalls some of the highs and lows of the race including fires, albatross and the weather:
On fires, “The start was really unpleasant, I had incidents with fire, and lots of loose gear, and the generator filling the boat with smoke and things like that, so it was not an easy start, I was pretty miserable for the first 48 hours or however long it was, but things change quickly and nothing lasts forever.”

On albatross, “Yes, there’s something very special about albatross, I know I wrote about them a lot, but they epitomize the south. You are there in three layers of clothing, clinging on to your boat and they are just soaring along gracefully.”

On the weather, “I was fairly nervous when the barometer started dropping and we had some serious forecasts from Meteo France, the Southern Ocean is such a strange place, you are isolated, but you feel isolated too, you are very alone and a long way from any help. But once I’d been through the first storm it was OK, but that sense of isolation is now something I actively seek, it is so desolate, wild and very beautiful, it is beyond me to describe it, it needs to be experienced.”

Steve White comments further on the support he received and his future plans, “Without my sponsor bluQube, and the anonymous donation which allowed me to sail under the banner of Toe in the Water, I would not even be on the water, let alone able to realise my 10 year dream of competing in the Vendee Globe. I would like to thank Simon Kearsley and his team for all the support they have given me over the years. Sponsorship is the life blood of this sport and without it, it simply would not happen. Forward-thinking companies such as bluQube should be commended for continuing to invest during these difficult times when the easy decision would be to pull out – I can’t thank them enough”

He added, “Now that I’m back in the UK it’s back to preparing ourselves and the boat for the next event, which will involve a few trips across the Channel and back for repairs and re-fits. If we can get further sponsorship in time I’ll be taking part in the Calais Round Britain, and the classic French races like Transat Jacques Vabre and the Route du Rhum, all the races I’ve watched from home like a lemon for years. I’d also like to do the Velux 5 Oceans, and then the Vendee Globe again in 2012.”
Steve is due to be interviewed by BBC’s Radio Solent’s Charlie Crocker next Tuesday 17th March. For further details of when this will be broadcast visit www.bluQube.co.uk

Meanwhile bluQube was announced as title sponsor for budding young solo sailor Katie Miller (katiemillerracing.com) at a ceremony at the Royal Southampton Yacht Club at the end of February which was also attended by guest sailing celebrities Dee Caffari and Dame Ellen MacArthur. For more information on Katie’s progress visit www.bluqube.co.uk/oceanracing

About the Vendee Globe

The Vendee Globe is a 27,000 mile, non-stop, circumnavigation of the globe along the old clipper route. It follows the Atlantic Ocean to the Cape of Good Hope; then clockwise around Antarctica keeping Cape Leeuwin and Cape Horn to port and then finally back to Sables d’Olonne. For further information visit www.vendeeglobe.org.en