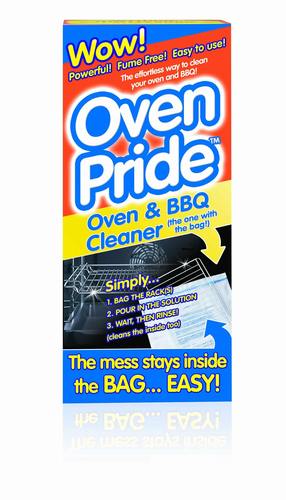 The company behind a controversial TV advert that has had more than 1,000 complaints from men – including more than 50 to the Advertising Standards Authority – insists it is being taken out of context.

The advert for Oven Pride™ – the one with the bag – kicked off a £1 million national TV campaign last week.

It features a reluctant man being forced to clean the oven by his long-suffering wife. You can see it at www.pride-range.co.uk.

The advert strapline states that Oven Pride is so easy, even a man can use it.

More than 50 complaints have already been received by the ASA.

And more than a thousand people – about 90 per cent of them men – have contacted the company directly through email, phone and forums.

“The advert simply portrays a typical couple who live together,” said Matt Stockdale of HomePride, the company that makes Oven Pride.

“The reality is that while some do, many male partners don’t pull their weight at home and this advert simple portrays that. Most women have a much more balanced view of life and see this advert as it was intended – tongue in cheek.

“Whilst we can’t please everyone, and certainly not all of the men who have complained, of course no offence was ever intended.”

Oven Pride is the UK’s leading oven cleaner and was invented by Matt in his garage in the year 2000.

Sales of Oven Pride have doubled since the advert went on-air, with some retailers selling out.

It is now the lead product in the Pride range, which also includes the new Stove Pride, Sink Pride, and Shower and Bath Pride.

Recent research by GMTV that revealed that people who had heard of Oven Pride are more likely to agree it was the best quality, worth paying more for, and the brand to trust more than any other brand.

• For any further information or interviews please contact Zoe Coll at Publicity Heaven PR agency on 08452 303049, or email press@publicityheaven.com