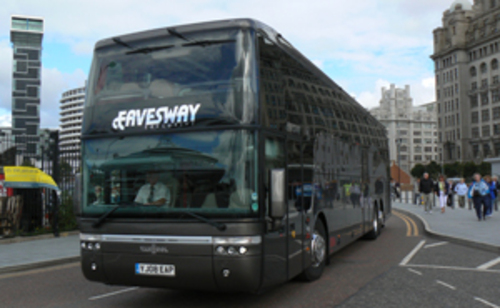 Gothenburg, Sweden, March 17th 2009 – Icomera AB, the world’s leading provider of cellular broadband gateways, has announced that Eavesway Travel Ltd. has equipped luxury team coaches for football clubs including Manchester United and Wigan Athletic with Icomera's award-winning Moovbox M200 mobile gateway that provides in-vehicle Wi-Fi hotspot connectivity at broadband speeds. The Moovbox will allow Premiere League footballers access to the Internet and email on the move, while also enabling Eavesway to communicate with drivers and send operational information such as schedules and itinerary amendments. Lancashire-based Eavesway Travel operates a fleet of twenty-seven Van Hool coaches, of which the Internet-enabled vehicles are branded with the 'Eavesway Exclusive' livery. Manchester United Football Club (MUFC) has been an Eavesway client since 1999 and, with the arrival of the new Moovbox-equipped team coach, has extended its contract by a further four years.

"The primary purpose of our corporate coaches is the transportation of the Premier League clubs to all their first and reserve team fixtures," said Mike Eaves, Managing Director at Eavesway Travel. "The real-time high-speed communication link provided by Icomera's Moovbox not only offers our passengers the very best on-board Internet facilities, but also gives us the means to manage and operate our fleet more efficiently." As well as serving some of the Britain's top football clubs, Eavesway Travel offers its Internet-enabled vehicles for private hire, working for a number of major corporate customers around the UK. Eavesway operates its Cruiselink services on behalf of P&O and Princess Cruises, transferring passengers to and from the port of Southampton in the south of England.

"Premiere League teams expect the very best facilities on their vehicles," said Dave Palmer, SVP of Worldwide Sales at Icomera. "The Moovbox M200 has helped Eavesway distinguish their fleet from the competition by offering the very latest in carrier-class on-board communications, which ultimately not only benefits the passengers but also day-to-day fleet operations."

Established in 1999, Icomera is the world’s leading provider of cellular broadband gateways delivering Internet connectivity for passenger transport, public safety and enterprise applications. Icomera technology bridges wide-area cellular networks such as 3G/HSPA and WiMAX with local Wi-Fi and Ethernet access. Icomera’s award-winning Moovbox devices are deployed on rail, road and sea serving millions of Wi-Fi connections, and providing real-time high-speed access for fleet tracking and mission critical on-board systems. Icomera reported over 3.7 million sessions by over one million passengers in the twelve months to October 31st 2008 on its in-vehicle Moovbox systems worldwide, a 272% increase over the period. Icomera is headquartered in Sweden with offices in the United Kingdom, and channel partners worldwide.