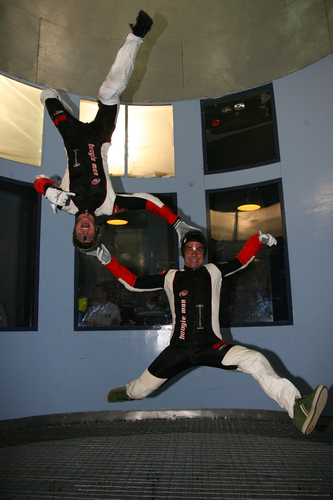 On the 4th and 5th of April Bedfordshire will host one of the biggest skydiving competitions in the World. however no planes or parachutes will be used, this competition takes place inside an enormous wind tunnel.

“The Bodyflight World Challenge is the largest competition of its kind and is really important to the sport in the UK” Says event organiser Bryony Doughty. “This year is the biggest competition yet with over 60 teams entered.”

There are two competitions within the challenge, Formation Skydiving which is all about speed and accuracy, and FreeFly which is much more artistic and creative.

For the last three years the Formation Skydiving competition has been dominated by the American national team Airspeed who will be back again defending their title. This year however all of the British teams have been training hard and have their sights set on taking Gold.

Skydiving is one of the fastest growing sports In the UK, as reflected in the recent success of British teams at the Skydiving World meet in France last summer where Bodyflight Storm, last year’s British Champions came first in the Women’s competition.

The Storm team members are currently taking a break from competition, but team captain and 5 time World Champion Claire Scott and team mate Hannah Betts couldn’t resist taking part at the World Challenge, and has even joined up with old rivals to do it:

“Me and a couple of friends have put together a fun team to compete in the Challenge. It is one of the best competitions in skydiving and it’s great to see the top teams in the World all under one roof. I used to compete against two of my team mates so it will be interesting being on the same team for once! Skydivers are a close knit community so I have known these girls for a long time. ”

Since opening in August 2005, Bodyflight has become recognised within the skydiving world as the best place to train as it is unrivalled for space and air quality. The massive 4.5 meter propeller can generate wind speeds of up to 180mph. Simulating freefall and allowing people to really fly.