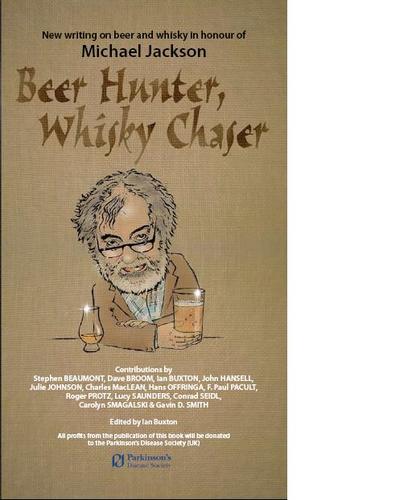 Leading international writers on beer and whisky have joined together in a unique project to celebrate the enduring legacy of celebrated drinks writer Michael Jackson (65), who died in August 2007 having suffered from Parkinson’s disease for over a decade. They have each donated a piece of new writing to Beer Hunter, Whisky Chaser that will be launched on 27 March 2009 in London to raise much-needed funds for the Parkinson’s Disease Society of the UK.

All have donated an original essay - without fee - to Beer Hunter, Whisky Chaser. The book will be published by Perthshire publisher Classic Expressions on 27 March to mark Jackson’s birth date. All proceeds from the publication, which was supported by leading single malt whisky The Glenlivet, will be donated to the Parkinson’s Disease Society of the UK.

Editor Ian Buxton, who conceived the project, said “Michael Jackson dominated the world of both beer and whisky writing for two decades and was hugely influential in both ‘real ale’ and single malt whisky. A complete generation of writers has cause to be grateful to him, not to mention countless brewers and distillers. This new book honours that legacy.”

He concludes: “If variety is what you celebrate in your choice of whisky or beer, then this is truly a joyous and eclectic celebration of a life well-lived. We have sought to honour Michael with words, fresh and new writing on beer and whisky that he would have enjoyed reading; that he would have respected; that he might even have wished to have written himself.”

Beer Hunter, Whisky Chaser (ISBN 978-1-906000-04-2) is a 176 page volume; hard cover bound in laminated covers with an illustration of Michael Jackson by artist Gill Allan and with place ribbon.

1. Michael Jackson was born in 1942 in Wetherby, Yorkshire where his father Isaac Jakowitz had anglicised his Lithuanian Jewish surname to Jackson. He became a journalist, most notably in Edinburgh where he first encountered whisky. On his return to London he briefly edited the advertising trade journal "Campaign".

Michael Jackson became famous in beer circles in 1977 when his book The World Guide to Beer was published. This was later translated into more than ten languages and is still considered to be one of the most fundamental books on the subject. His work had a special influence on the popularisation of the brewing culture in North America, and he would later host a popular TV show entitled The Beer Hunter, which was shown on Channel 4 and the Discovery Channel. During his 30 year career as a critic, he wrote columns for a large number of newspapers and magazines.

He was appointed to an honorary officer of the Ridderschap van de Roerstok in 1997 for his important contribution to the international success of Belgian beers, an honour previously only given to brewers.

Michael Jackson was also an important reviewer of whiskies, most notably in his Malt Whisky Companion He was arguably the most important writer on whisky since the Victorian commentator Alfred Barnard and certainly the most significant and influential modern whisky writer. This was recognized by the prestigious award of "Master of the Quaich", the James Beard award in 2006, and the prodigious sale of his whisky books and sell-out attendances at his tastings. He had enormous influence on the development of single malt whisky globally.

Apart from his work as a journalist and a critic, he was also a great fan of rugby league. It was revealed in December 2006 that Michael Jackson "is and has been suffering for at least a decade from Parkinson's Disease”. Michael Jackson died of a heart attack in his London home on the morning of 30 August 2007 at the age of 65. (From Wikipedia, the free encyclopedia.)

2. Classic Expressions is a boutique publishing house, based in Perthshire, Scotland, specialising in facsimile reprints of rare and lost whisky classics. For more details see www.classicexpressions.co.uk

3. Ian Buxton first met Michael Jackson in February 1984. A well-known whisky writer in his own regard, he was formerly Marketing Director of a leading single malt Scotch whisky. Recently he created the World Whiskies Conference and continues his marketing consultancy work alongside an active writing career. He is a Keeper of the Quaich and a Liveryman of the Worshipful Company of Distillers. Ian co-founded Classic Expressions with Neil Wilson in late 2006 with a mission to save lost whisky literature for posterity.

4. As ‘the single malt that started it all’ The Glenlivet boasted the first licensed distillery in Glenlivet in 1824 and was admired and imitated by many others in Speyside who added the Glenlivet name to theirs, making it an integral part of the true spirit of Speyside.

The Glenlivet has the heritage to be number one and is challenging for global market leadership. It is the brand that sets the agenda and is the number two malt whisky in the world by volume and the biggest selling malt in the dynamic US market.

An informal launch event will be held at 12.30 on Friday 27 March (Michael’s birthday) at The Distillers on Fulham Palace Road (one of his favourite pubs), Hammersmith and will be a very informal affair.