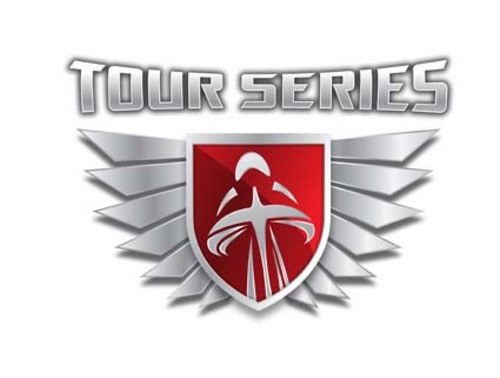 This summer the UK’s top professional cycling teams will battle it out gladiatorial-style in The Tour Series, a 10 round town and city centre series around the UK.

Starting on the 21st May, in Milton Keynes, 10 teams of five highly-tuned professional cyclists will engage in combat against each other to become the overall champions of The Tour Series. Each night the teams will aim to place their top three riders in the highest positions at the end of one hour of intense, fast-paced and attacking racing around a 1-1.5km city centre circuit - delivering all of the thrills and spills of this high-speed sport.

From 7pm on Tuesday and Thursday evenings, The Tour Series promises to create a festival of cycling-based activities and races that will generate a carnival atmosphere at each of the chosen venues. Each round will be televised via a major Terrestrial broadcaster.

Nine towns and cities are already confirmed to host a Tour Series event - Milton Keynes, Exeter, Woking, Peterborough, Blackpool, Southport, Stoke-on-Trent and Chester with the finals of the series being staged at Southend. The final venue completing the line-up is to be announced very soon.

10 of the very best professional teams in the UK have been invited to race in the Tour Series, many comprising internationally and nationally renowned cycling stars, with the teams being chosen on performance, as well as strength in squad numbers. Each team consists of a squad of between eight and 12 riders and from the squad five riders are nominated for each race.

Speaking about The Tour Series, Event Organiser on behalf of SweetSpot, Mick Bennett said; ‘I’m very happy to see a return to professionally structured, dynamic town and city centre racing, bringing a vibrant and lively atmosphere to towns and cities across the UK this summer. The team responsible for putting the Tour Series together has worked extremely hard to make this a reality. I am proud of what has been achieved and now can’t wait for the events to start.’

Tour Series Director of Racing, and two times British Champion Brian Smith comments; ‘British cycling’s success at the Olympics, coupled with the rise in profile of the Premier Calendar and The Tour Of Britain, has meant there are a greater number of cycling teams forming and those already in existence have become stronger. The Tour Series teams have been selected from the best of these professional teams in the UK and this sets the scene for a showdown of British cycling talent. The fast and furious racing will bring the ‘razzamataz’ of cycling to our city centres whilst the professional performance of our partner teams will engage with the British public to take The Tour Series to the next level.’

Speaking about the exciting new series, Phil Corley, Team Manager of Team Corley Cycles, says; ‘Having competed in many city centre races in the '70's and '80's I appreciate the excitement created by this type of high speed close-quarter racing. This is a great opportunity to bring this back to the public and keep cycle racing on an upward curve. The team format of this series will allow different tactics to be involved and ensure all riders have a significant part to play in the outcome.’

Simon Gaywood, Team Leader of Team Corley Cycles comments; ‘I am really excited at the prospect of racing in front of large crowds and it has brought out a renewed enthusiasm for me. The team aspect of The Tour Series throws up different challenges than usual, in that we cannot concentrate solely on the winner, but must consider maximising the performance of the whole team. I am fortunate that the other members of Team Corley are as committed as I am and we look forward to being very competitive.’

Further info on the Tour Series can be found at www.tourseries.co.uk

SweetSpot, the organisers and promoters of The Tour of Britain, will deliver the Tour Series in conjunction with leading media and sponsorship company, Cyclevox.

SweetSpot Group Ltd is the company behind the successful revival of The Tour of Britain, re-launching the event in 2004 after a five-year absence from the calendar.

SweetSpot is a sports marketing and events company specialising in the creation and execution of high quality, commercially successful, annual sporting events.

As well as The Tour of Britain, SweetSpot was responsible for facilitating the Grand Départ of the Tour de France in London 2007 and provided logistical support for Honda’s Earth Dreams Tour.

Cyclevox is a media, sponsorship and consultancy company focused on the cycling market.

Cyclevox has acted as consultants to many high profile projects including the new Cervelo Test Team led by Carlos Sastre, London Paris Cycle Tour and media projects at the Tour De France for major teams. It also brought the British BMX Championships to television for British Cycling.

This press release was distributed by ResponseSource Press Release Wire on behalf of Icons and Outcasts in the following categories: Health, Leisure & Hobbies, Sport, for more information visit https://pressreleasewire.responsesource.com/about.