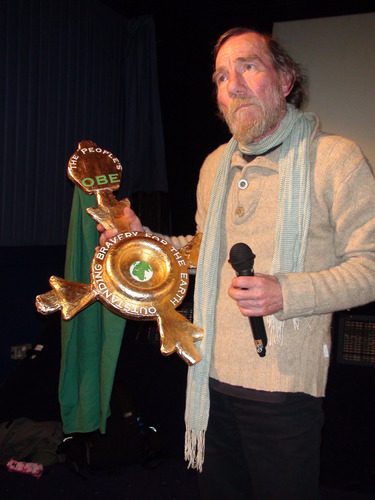 Pete Postlethwaite, star of Age of Stupid gets given a green 'OBE' by ‘the Carbon Coach’ Dave Hampton, and Katie Keegan of One Green Earth.

On 25th March, at the Odeon, Panton Street, off Haymarket, London, Pete Postlethwaite, star of new climate movie The Age of Stupid, was taken by surprise during a ‘question time’ session by something green, but it wasn't green custard.

After the special screening that he attended, he was awarded a new 'Peoples OBE’ by fans Katie Keegan and Dave Hampton on behalf of all those calling for more urgent action to reduce greenhouse emissions, and as part of the NOT STUPID campaign www.notstupid.org

The Award (hand crafted with 98% recycled materials) - dubbed The People’s OBE – for ‘Outstanding Bravery for the Earth’ – was in recognition of Pete’s pledge (made at the Premiere of the film on Sunday 15th March) to return his OBE to Her Majesty the Queen if the government gives the go-ahead, later this year, to the controversial Kingsnorth coal - fired power station in Kent.

On being presented with the ‘Gong’, Pete said:

"Well if I do, (have to hand back the other OBE in protest) I've got a fantastic substitute!"

Carbon Coach Dave Hampton said: “Pete seemed genuinely touched, not to mention surprised at the size of the gong!" adding “I don't have an MBE/OBE, but if I did, I would seriously be thinking about handing mine back to the Queen?"