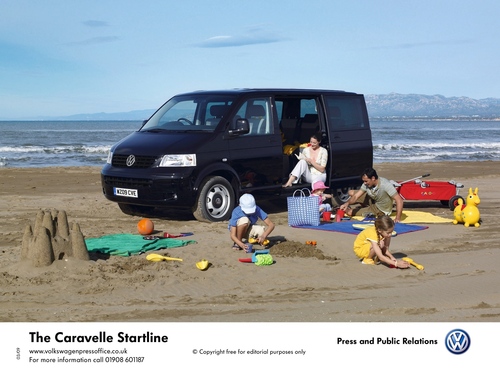 Last year, for the first time, the company was able to sell more than half a million light and heavy commercial vehicles worldwide. With a total of 502,964 (previous year’s total: 488,726) deliveries to customers were up by 2.9 percent compared to the year before. The most-sold van in 2008, with 178,007 unit sales (previous year: 191,205) was the T5 with its Transporter, Caravelle, Multivan and California models. The Caddy van also continued on the road to success, with 151,565 vehicles delivered in 2008 (as compared to 147,133 in the previous year), representing an increase of 3 percent. The Crafter, too, continued its upward trend, achieving 10.7 percent growth, with 51,101 units sold (previous year’s figure: 46,161).

Thus Volkswagen Commercial Vehicles (www.vwcv.co.uk) was able to increase its lead in the European van market. “With a total of more than 332,000 unit sales, we have successfully defended our ‘title’ as European champions and have pulled even further away from the runners-up”, Schaller pointed out. Volkswagen Commercial Vehicles share of the European market in 2008 was up 0.4 percent, at 15 percent.

Outside Europe, too, Volkswagen Commercial Vehicles continued to gain ground. The Saveiro and T2 models, which are both produced and sold in South America, topped their previous year’s performance by more than 17 percent, achieving unit sales of 67,270 (previous year’s figure: 57,446). The class of heavy commercial vehicles also showed positive development. The 55,021 units delivered in 2008 (as compared to 46,781 in the previous year) represented a plus of 17.6 percent – and thus also a new sales record.

The most important financial indicators also developed positively in the business year 2008, attaining new record values. “We have achieved the good figures for turnover and profits not only by making more deliveries, but also by practising stringent cost and efficiency management,” explained Klaus-Dieter Schürmann, member of the board of management with responsibility for finances and integration technology.
Turnover on the markets improved by 3.3 percent, rising to 9.6 thousand million Euro. Operative profit went up by 23 percent to 375 million Euro, an all-time record. Reduced product and materials costs made an important contribution to this figure, as did the substantially better performance of purchasing. Investments by the brand rose by 92 percent compared to the previous year, amounting to 275 million Euro. Net cash flow was once again clearly positive, at 183 million Euro. Return on capital reached double figures for the first time, with a value of 11.5 percent. The profit margin went up to 3.9 percent.

“Viewed in the context of the increasingly harsh economic situation in the second half of the year, we have attained an excellent result – the best balance achieved by our brand so far. This means that despite the present crisis we have the financial basis to continue pursuing our long term growth aims“, Schürmann stressed.

Since the middle of the second half-year period, Volkswagen Commercial Vehicles has also seen itself confronted by a radically different business climate. “We cannot ignore this development, and we shall be selling fewer automobiles this year than in 2008”, Schaller said. “In this environment, we want to gain a bigger share of the market.”
He perceives the brand as a specialist for light commercial vehicles, but as being in a sufficiently strong position “to keep on course, even in stormy weather “.

At the same time, he says, the product range will continue to expand. As well as further variants of the Caddy, T5 and Crafter vans, the most significant addition will be the new Pickup, which Volkswagen Commercial Vehicles will be launching first on the South American market at the end of 2009, with a later launch in Europe. “The new Pickup will bring our brand into a different dimension, and enable us to gain access to new markets“, the CEO of the brand emphasized.

ABOUT
Volkswagen Commercial Vehicles is a provider of high quality new and used vans. Our award-winning range includes: the Transporter van, the California, the Crafter, the Caravelle, the VW Caddy and Caddy Maxi.

Vans for sale can be found through our network of Volkswagen UK Van Centres by visiting www.volkswagen-vans.co.uk/van-centres

Our network of UK van rental centres offers VW van hire services to cover a range of requirements from moving house, to keeping your business on the move. To find your nearest Volkswagen van rental centre, visit www.volkswagen-vans.co.uk/aftersales/van-rental.