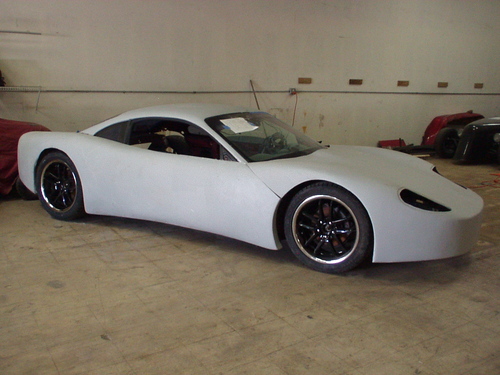 The GTE brings up innovative features in its electric drive system. The car is powered by two Advance Motors DC motors connected directly (no gearbox) to the front and rear Ford differentials and providing peak 100 hp each, running at 144 volts.

The prototype was built around a Ford Mustang cockpit for enhanced safety and improved interior quality, providing comfortable seating for 4 people. The body was designed by Sigma and is made of reinforced fiberglass.

“This project is a test bed for a commercial high performance sports model we will bring to the market by early 2010, when we expect to sell 500 cars”, said Matias Gorfinkiel, head of operations.

Maximum speed is expected at 145 mph and the lithium-ion cell packs should provide up to 100 miles range. “This will be one of the fastest electric cars in the world”, said Steve Kase, head of development. “And it’s one of the few all-wheel electric cars around”, he adds.

The GTE prototype awaits final components before test drive in James Island (SC) where it was built.

Sigma Motorworks, Inc is an US-based developer of electric drive vehicles for the US and European markets. The company believes in independence from fossil fuel sources and clean transportation projects.

With initial funding from private investors, Sigma is currently working on new electric vehicle concepts for urban use as well as production car conversions.