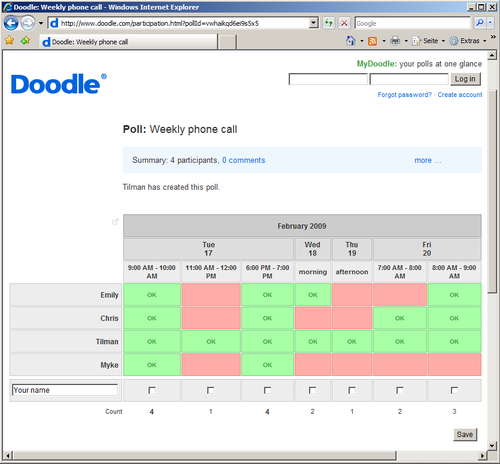 2 April, 2009 – Zurich – Doodle, the popular Web 2.0 scheduling tool, announced today that it has surpassed the three million user mark globally* and is continuing to grow at around 10 per cent each month. With growth up 167 per cent compared to this time last year, Doodle’s rapid advancement demonstrates the consumer and business demand for simple, effective online scheduling tools, the company said. In Switzerland more than one out of ten people in the entire population use the service at least once a month – a growth of 50 per cent in the last year. In Germany, the US and the UK, Doodle saw user numbers grow more than quadruple the growth of last year.

“Trying to get people to agree to a time for a business meeting, conference call or social event, even by email, can be a nightmare - that’s why we formed this company,” Doodle’s founder and CEO Michael Näf said. “The rapid expansion in the use of Doodle by both businesses and consumers demonstrates that people around the world are getting used to the concept of arranging meetings via an online scheduling tool – as long as it’s self-explanatory and doesn’t swallow up time itself. Our research shows that people are coming back and using Doodle again and again. This is because it saves people time.”


* Unique Visitors per month according to Google Analytics (March 2009)

Doodle makes it easy to find the “right time” for a group gathering or a meeting. With just a few clicks you can establish a “poll” – a tabular display of possible available time slots – invite participants and see clearly in a table which options best suit everyone. Doodle is a free web service, doesn’t require any registration and is available in 28 languages worldwide. The usability and the entrepreneurial achievements of Doodle have been awarded across the world: For example, the Mashable Open Web Awards 2008 “Bloggers’ Choice” and “People’s Choice”, and the Swiss ICT Award 2008.

Doodle has 3 million unique clients with growing numbers in the UK. In Doodle’s home country, Switzerland, 10 per cent of the entire population use the service at least once a month, and this figure is growing.