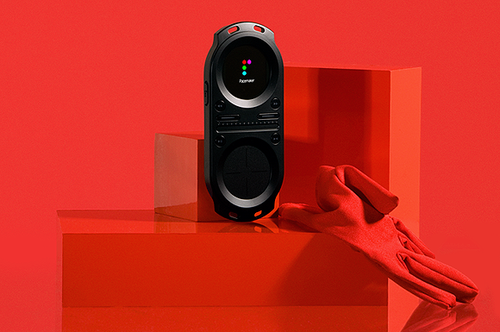 On 1st May 2009, Swedish tech innovation company, Tonium, will launch the next generation of Pacemaker, the revolutionary, pocket sized DJ system. The new version of this unique, hand held music player will feature auto beatmatch, which, at the touch of a button, will allow anyone to mix tracks like a DJ. With a 60GB hard drive and a host of other new innovations, Tonium have designed the new Pacemaker to allow all music lovers to creatively interact with their music like never before. The new Pacemaker will be the most affordable and accessible yet, retailing at £369 (including VAT).

First launched in mid 2008, Pacemaker is a pocket sized, portable music player that allows you to DJ any time and anywhere. You can play two tracks simultaneously, matching beats and mixing between the two; just like a traditional DJ set up. You can also use effects, filters and loops to create your own sounds. Pacemaker has won numerous awards around the world, including an unprecedented 3 awards for sound and design innovation at the International CES ’09 in Las Vegas.

While the hardware remains the same, the new Pacemaker user interface has been completely reworked, making it more user-friendly and highly intuitive. Alongside the auto beatmatch function is an on-screen 'beat graph' giving a visual representation of the beats in tracks that are playing, making mixing records so easy that anyone can do it within minutes! The music library has also been vastly improved with fast scroll, improved track list filters and crates functions. Further additions and improvements include timestretching (master tempo) and Key, allowing you to change the key of the track and avoid any key clashes when you mix! Further new effects; Crush, Wah, Delay and Trans (as well as the ability to customise the touch pad, arranging the array of effects wherever you want).

One of the founders of Tonium, Ola Sars comments,

“Pacemaker is the first product in the world that truly brings the enjoyment of DJ’ing to the masses. The new Pacemaker will allow you to mix records in a matter of minutes. Add in effects, filters and loops and you will begin to interact with your music in a whole new way. If you love music as we do at Tonium, this is an exciting development, which we hope will bring even more people closer to their music.”

Tonium will make this new interface available as a 100% free firmware update to all those who already own a Pacemaker, meaning that once purchased, you will never own an outdated device. The 60 GB hard drive can store 15,000 tracks and will work with all file types including MP3, WAV, FLAC, AAC and OGG.

Tonium will also offer a new and improved Pacemaker Editor to its users; a free, downloadable PC and MAC compatible application that allows you to play music and edit and create mixes. You can download mixes you have created from Pacemaker, or upload mixes to it from the Pacemaker Editor.

TONIUM is a Swedish company, established by a tightly knit group of passionate people with a background in music, design and engineering. With a flair for innovation, Tonium exists as a company dedicated to promoting the sharing of musical tastes in a socially engaging context.

PACEMAKER SPEC IN FULL: See below.