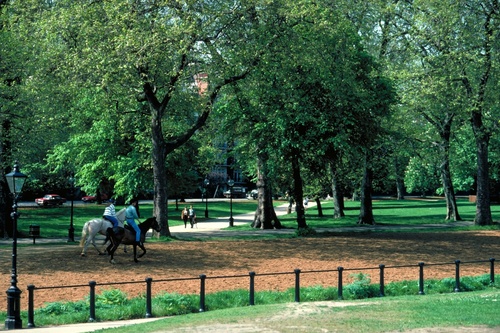 WHERE TO STAY, WHAT TO DO AND HOW TO SAVE
ON YOUR NEXT LONDON VISIT
Explore London hotels, neighborhoods and free attractions

LONDON, April 21, 2009 -- London is always a good idea as a travel destination as there are so many great deals available on London hotels and airfare. Some tips for saving money: Broaden your search for London hotels to include all neighborhoods within minutes of the center by London Underground. Buy an Oyster card for savings on all public transportation. And take advantage of the free things there are to do, including most art galleries and museums – from the Tate Modern to the British Museum.

For information about London visit www.visitlondon.com and www.visitbritain.com and for obtaining Oyster cards, visit http://www.tfl.gov.uk/.

To check out London hotels in a variety of neighborhoods, visit Marriott’s London Hotels collections and follow links to deals at all 15 Marriott, Renaissance and Courtyard hotels -- from Hyde Park to the West End, Westminster to Regent’s Park, Maida Vale to Kensington and from Twickenham to London’s two busiest airports, Heathrow and Gatwick.

Check out free sites in Hyde Park, Kensington Gardens, Green Park and St. James’s Park, and if you must spend, find retail legends like Selfridges and new designers in Saville Row, Bond Street and Oxford Street. Celebrate the restoration and 80th birthday of Grosvenor House, A JW Marriott Hotel on Park Lane, with the Birthday Celebration package (£370 per night inclusive, through December 31, 2009), including champagne and cake, £50 Selfridges gift certificate, quintessential British Afternoon Tea served in the Park Room and English Breakfast served in BORD’EAUX.(Tube stop: Hyde Park Corner) The luxe London Marriott Hotel Grosvenor Square, recently renovated top to bottom, offers the A-maze-ing Weekend package (£190 - £205 GBP; through: July 8, 2009) including London's best hotel breakfast in Gordon Ramsay's acclaimed new maze Grill restaurant.(Tube: Bond Street). With the London Eye Package, you can experience the great views of London and combine your trip with a stay at London Marriott Marble Arch, with rates from £199 GBP (code ARN; valid through May 7, 2009). (Tube: Marble Arch) Another option is the London Marriott Hotel Park Lane, once a stately apartment building overlooking Hyde Park, now a luxury hotel with the feel of a boutique. (Tube: Marble Arch)

Many of London’s iconic attractions are here: the London Eye, London Aquarium and the Houses of Parliament and Big Ben. The 5-star London Marriott Hotel, County Hall, once a seat of government, has been restored but retains its history and breathtaking views of Westminster across the Thames. (Tube stops: Westminster or Waterloo)

This is the London hotel for close proximity to Wembley Stadium, the London Zoo/Regent’s Park and the Lord's Cricket Ground. The London Marriott Regent’s Park London Zoo Package, with rates from £143 - £160 (code ZOO; through December 31, 2009), includes a family pass to the Zoo, breakfast and access to Leisure Club. (Tube stop: Swiss Cottage)

From a home-base in Kensington, explore the shopping area of Knightsbridge and the famous emporium, Harrods, as well as Kensington Palace, the Natural History Museum and Royal Albert Hall. The London Marriott Kensington offers the Harrods Shop ‘til You Drop Package from £170 - £250.00 GBP (code PK9; valid through October 22, 2009), including £30 voucher to spend in Harrods and full English Breakfast. (Tube stop: Earl’s Court)

One of the busiest docks in the world, today Canary Wharf is a business and shopping district in East London, centered on the old West India docks. The O2 package at London Marriott West India Quay, has rates from £262 GBP (code ZJ8; through December 17, 2009), including breakfast in Curve Restaurant, two cocktails in the Manhattan bar and two London Underground travel cards. (Tube stop: Canary Wharf)

St. Pancras Station, the terminus for Eurostar high-speed trains, was recently restored and it, together with the red brick Grade 1 listed Gothic St. Pancras Chambers hotel, are popular with film and television productions, appearing in every Harry Potter film to date. The hotel will reopen as the Renaissance London St. Pancras in 2010. (Tube stop: King’s Cross/St. Pancras)

The London Heathrow Marriott Hotel is an ideal hotel in London for exploring nearby Windsor Castle. And the Renaissance London Heathrow Hotel, close by terminals 1, 2 and 3, has spectacular views from many rooms. The new Courtyard by Marriott London Gatwick Airport is approximately an eight-minute walk from the South Terminal and just 30 minutes from London Victoria by Gatwick Express Train.

Just six miles from Heathrow Airport and 20 minutes from Central London, the brand new London Marriott Hotel Twickenham sits within the South Stand of the Twickenham Rugby Stadium and is perfectly located for visits to Hampton Court Palace and Kew Gardens.

This press release was distributed by ResponseSource Press Release Wire on behalf of Marriott International in the following categories: Travel, for more information visit https://pressreleasewire.responsesource.com/about.