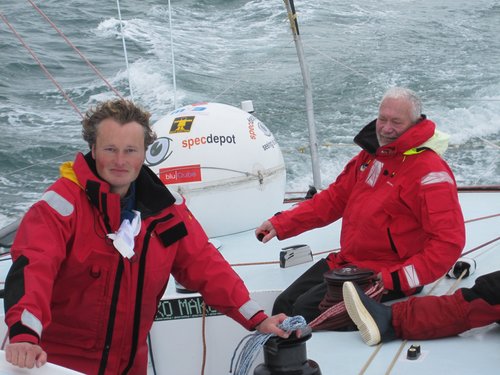 Bristol, 15th April 09 – bluQube, a leading vendor of financial management software, was proud to take part in the return of acclaimed round the world yachtsman Steve White to his home port of Weymouth last Thursday April 9th. On board ‘Toe in the Water’, the boat that came an incredible 8th in the Vendee Globe, were Steve White and his son Jason, Sir Robin Knox Johnson and Simon Kearsley, CEO at bluQube who has co-sponsored Steve for the last two years.

Since finishing 8th out of a total of 30 competitors in the World’s most famous yacht race, Steve White has risen 20 places to 9th in the IMOCA global sailing league tables.

Accompanying Steve on his final leg home was sailing legend Sir Robin Knox Johnston, the pioneer of solo sailing, who completed the first historic solo non-stop circumnavigation nearly 40 years ago: “I feel a tremendous empathy with Steve. He had no financial support to speak of, but his determination to succeed, backed by his supportive family, meant he had a greater motivation than most - and he succeeded, to join a very special club of 173 solo circumnavigators.”

bluQube’s CEO Simon Kearsley commented, “It has been real pleasure to be involved in Steve’s campaign over the last few years and it was an honour to be invited to help crew the boat on its homecoming to Weymouth. As a company, our sponsorship of Steve has been a huge success, giving us something exciting to talk about and more effectively engage with both existing and prospective customers. We can wholeheartedly recommend it to any other business that is looking to raise their profile.”

The afternoon’s homecoming was followed by an evening reception and party at the Royal Dorset Yacht Club.

Steve will now start making plans and raising funds for his next major campaign the ‘Velux Five Oceans’; another solo circum-navigation of the globe that starts in October 2010, and then a second Vendee Globe in 2012. For more information on sponsorship opportunities visit www.whiteoceanracing.com or email Kim White at kim@whiteoceanracing.com

About Symmetry:
Established in 1996, Symmetry is a software company that specialises in the development and supply of business-to-business financial solutions within the UK. The company’s core product, bluQube, is a fully integrated financial and management accounting solution aimed at organisations ranging in size from £3M turnover to £250M turnover and with user populations from 2 to 800+ users. www.bluqube.co.uk