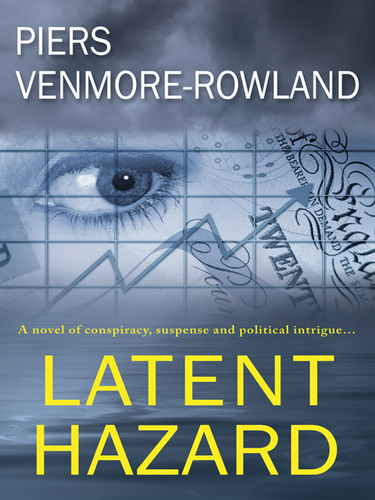 What do the following press articles have in common with Latent Hazard the new thriller by Piers Venmore-Rowland?

Answer – These topics are to be found in the up to the moment plot of Latent Hazard, a novel of conspiracy, suspense, political intrigue and spin.

Or as one reader puts it:

“One hopes that Al-Qaeda members never decide to try their hand at what Latent Hazard describes. This book is a mesmerising read! An innocent man (?) is whisked from a brutal MI5 interrogation into the heart of the biggest terrorist conspiracy to hit the Western world. I don't want to give away too much for obvious reasons, but the sheer detail, breakneck pace and terrifying accuracy of the story makes this book and absolute must-read for all! If any politicians read this, please take Piers Venmore-Rowland's thankfully fictional story to heart and make sure it never happens here...” The Fiction Guru - Amazon Customer Review.

In a plot reminiscent of Robert Ludlum or Alistair MacLean the reader is taken on a roller-coaster ride in this masterly piece of fiction. The already weak British economy is in jeopardy. How can the newly elected politicians - facing unfriendly debt markets, terrorist attacks and a further mushrooming of public sector borrowings - survive?

Surprisingly for a thriller - the author is a former business school professor - it offers real solutions to the current financial problems. If you have not heard of Indexhold – affordable home ownership for key workers; or custodianholders - the new shareholders of not-for-profit corporations; or Annuities / Government REITs – the funding vehicle for Indexholds, then here is the opportunity to find out how they can provide a significant sustainable economic stimulus at a low cost to the Treasury. And at the same time enjoy the political twists and turns in a thriller which takes one from Reykjavík to Morocco, and from Tallinn to South West England!

This is a political thriller set against a background of a race against time to unravel the terrorists’ apocalyptic plans which target the energy and financial markets. Latent Hazard is a gripping read and it offers insights into what could be tomorrow’s headlines. It is a thinking man’s and a thinking woman’s book.

Piers Venmore-Rowland says, “the rules and regulations governing the banking sector have been shown to be not fit for purpose. This industry is not alone. Elsewhere many uneventful years have dulled the regulators’ appetite for change – opaqueness and old fashioned concepts make us vulnerable. In the current testing times the last thing we need is myopia and spin. If we continue to ignore real hazards which have the wherewithal to challenge the very fabric of our society, we do so at our peril. I hope that Latent Hazard will be an enjoyable read but will also help focus the thoughts of our politicians and decision makers.”

Venmore-Rowland spent most of his career working in the City of London as a chartered surveyor, an investment analyst with a leading firm of stock brokers, and for over a decade as a professor at City University Business School. Piers now lives with his family in Suffolk.

Next month wearing his academic hat he will publish through Galleons Green’s “Changing the Perceived View” series of books: Indexhold – the missing rung on the property ladder. This will be followed by his books on Annuities and Government REITs and then Custodianholders and Not-for-profit Corporations.

Latent Hazard is available in large paperback at £9.99 RRP through branches of Waterstone’s and via local bookshops. It is also downloadable for eBook enthusiasts, at competitive prices in Mobipocket, EPUB, Microsoft Reader and Kindle versions. The trade paperback, RRP £7.99, will be published next month.

Journalists and the Media

To request a review copy of Latent Hazard please e-mail your name and address to Galleons Green on info@galleonsgreen.co.uk

Piers Venmore-Rowland, is available to talk to journalists and the media through the publishers Galleons Green on 01473 700127, or he can be emailed on author@latenthazard.com.