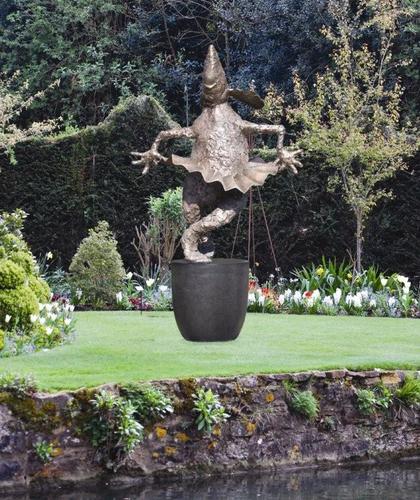 A rising star of the art world is set to make his professional debut appearance at Chelsea Flower Show this year with the celebrity backing of Diarmuid Gavin.

Stephen Charlton creates enchanting aand humourous animal sculptured forms in bronze for both indoor and outdoor settings from his studio in Wellesbourne, Warwickshire.

Dubbed the “rock ‘n’ roll” gardener, Diarmuid provided the first major public platform for Stephen’s work last year when he took loan of a ‘mouse on a ball’ sculpture, to exhibit in his Chelsea garden last year.

Since then Stephen Charlton has been encouraged to make a career of his long-standing hobby and has chosen Chelsea Flower show to be the platform for the launch.

Describing Stephen’s work, Diarmuid Gavin said: “Stephen’s sculptures have a distinctive textural quality that lends themselves superbly to gardens. His animals conjure up magical stories that enliven a space, but more than that, they become intrinsically linked with the landscape.

“Prancing hares in fields of grass, a mouse balancing on a ball and another skating across a pond. They are striking, enchanting and unmistakably Stephen Charlton.”

Working in both clay and resin the sculptor uses the traditional loss wax process casting his limited editions in bronze that are becoming collectable items. Each sculpture is finished in a patination a colour that suits each individual piece.

Stephen added: “Sculpture has given me a feeling of purpose, something that can be enjoyed by so many who will see and feel something for themselves. I love what I do. I draw as much as I can with anything and on anything that comes to hand.

Stephen left last year’s Chelsea show with a £5,000 private commission for two mad hares that will sit in a private garden in the county, an invitation to send new designs to Diarmuid, and a number of corporate enquiries.