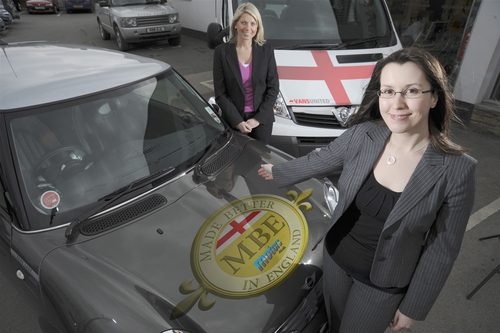 With British car production falling at its fastest rate
since 1968 two of the country’s leading motoring websiteshave joined forces to help support the future of the country’s car makers and celebrate the quality of English vehicle manufacturing.

Motors.co.uk and vansunited.co.uk – used by a combined three million car and van buyers every month - have created the ‘Motoring Honours list’ of MBE’s (Made Better in England) to highlight the vehicles on their websites that are manufactured on home soil.

Launched this week to coincide with the Budget and St George’s Day, the campaign follows a poll of 1,836 car and van buyers which reveals two thirds of motorists (66 per cent) want to buy a vehicle that is manufactured in England to help support the country’s motor industry during the credit crunch.

Sales within the UK motor market over the first three months of 2009 have fallen by 200,000 units (29.7 per cent) with new car registrations falling 30.5 percent in March to 313,912 units. However, in January this year, business secretary Peter Mandelson outlined the government's rescue package for the car industry, which will unlock £2.3bn in loans for car manufacturers and suppliers.

With the Government’s Scrappage scheme set to be introduced next month, consumers could be provided with the incentive needed to increase demand for new cars, with 80 per cent of buyers saying they would be kick-started into shopping for a new vehicle when the scheme is introduced.

Yet the poll shows the majority of van and car buyers are confused when it comes to knowing which motors are made in England. Less than half of all motorists realise that the Honda Civic is made in England and only one in five are aware the Nissan Micra is made in Sunderland. Further confusion exists when it comes to vans with only 18 per cent of commercial vehicle drivers knowing the Vauxhall Vivaro is made in Luton.

Katie Armitage, Marketing Manager for motors.co.uksaid:
“There’s no denying the UK motor industry has hit hard times with news of doom and gloom hitting the headlines. What is inspiring from our research however is not only the number of buyers who actively want to support the country’s industry by choosing to buy cars made on home soil but also the number who would be kick-started to do this by the Government’s proposed scrappage scheme.

“There are still more cars and vans manufactured in England than any other european country and buyers want this to continue.”

Vehicle manufacturing takes place at over 30 separate production sites in the UK. Across Europe only Germany has more manufacturing sites than England demonstrating that English made cars are still a source of national pride.

Duncan Colman, Product Manager for vansunited.co.uk said: “In the face of economic uncertainty now is the time to celebrate the vans made in England such as the iconic Ford Transit which was designed in Essex and is assembled in Southampton with transmissions from Merseyside. The poll shows that van and car buyers would prefer to buy English but awareness of which cars are made in England is still low.

“As part of the campaign, all the vans and cars that are made in England on the vansunited.co.uk and motors.co.uk websites will be awarded an MBE to help buyers choose an English motor.”

For more details of the Made Better in England campaign visit the motors.co.uk or vansunited.co.uk websites.

To help you support the Made Better in England campaign motors.co.uk and vansunited.co.uk has put together an MBE honours list of English made cars for every budget from the humble Honda Civic to the mighty Aston Martin: