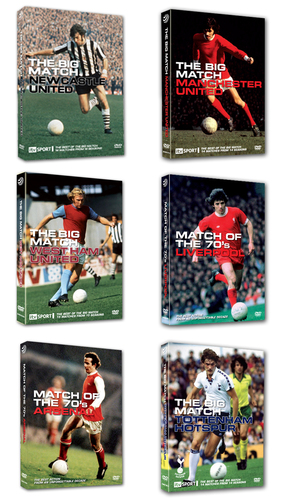 Packed with big hair, big ‘tashes, but not so big shorts, The BIG Match DVD range is a nostalgic trip down memory lane, revisiting an era in which families across the land would huddle around the TV every weekend to experience the novelty of live football being beamed into their homes.

Conjuring up memories of lazy weekend afternoons in front of the television at the end of a tough week of playground sticker swapping and conker bashing the original football magazine show, which brought childhood heroes such as Hoddle, Best, and Keegan into living rooms across the land is to make its DVD debut.

Anchored by Brian Moore, the DVD range transports viewers to a time when football really was a funny old game; nobody batted an eye at Bobby Charlton’s combover; Kevin Keegan’s perm was considered the height of fashion; players showed off more leg than a bucket of KFC; and the smell of bovine based drinks filled the terraces.

The ITV archives have been trawled to bring viewers the very best match action from the top teams of the day with the Manchester United, Tottenham Hotspur, and Liverpool releases first to hit the shelves followed shortly by West Ham, Newcastle, Arsenal, and Chelsea.

In true nostalgic form, the DVD wouldn’t be complete without the amusing segments that the Big Match became famous for and the series doesn’t disappoint as viewers are treated to The BIG Match Fun Spot featuring the latest ‘high-tech’ wizardry of the day; some real gems courtesy of Viewers Letters; and the surreal sight of Kevin Keegan, Mike Channon and Elton John presenting a Christmas special together.

So pick a spot in front of the telly for an afternoon of entertainment delivered with the charm, wit and style oozed by Brian Moore and Jimmy Hill, and revisit classic action from the best of The BIG Match as the likes of Keegan, Best, Hoddle, and Moore bang them in.

N.B. Releases for Liverpool and Arsenal will be branded as ‘Match of the 70’s’ titles.

Available from and all good DVD retailers.
DVD Copies available for competition and review purposes.