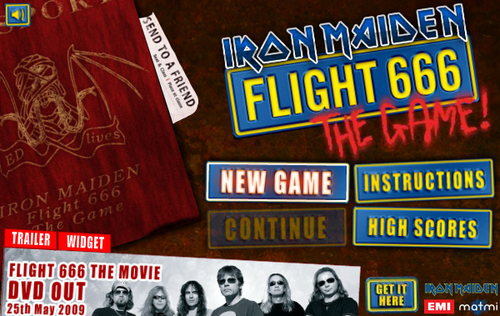 To support the release of EMI’s award winning Iron Maiden docu-film, “Flight 666”, branded entertainment specialists Matmi have launched an advergame of the same name to promote the film’s imminent DVD/Blu-ray and album release on 25th May 2009.

The quirky and addictive “Flight 666” game mimics Iron Maiden’s epic “Somewhere Back In Time” tour which took in 23 concerts, five continents and a 50,000 mile trip in just 45 days last year. In a nod to Iron Maiden vocalist Bruce Dickinson piloting the plane and flying the band around the world himself, gamers fly the Maiden plane through 10 levels set in five of the tour’s host countries, dropping speakers to get the world rocking. Every second level unlocks free trailers for the film and the game includes a competition for exclusive Iron Maiden merchandise.

Geoff Smith, Digital Director, EMI Marketing, says EMI takes great pride in using creative marketing techniques to support its artists: “Advergaming has proved to be a great way to enhance EMI’s traditional marketing campaigns. The ‘Flight 666’ game is designed to entertain Iron Maiden’s enormous worldwide audience, and captivate even more players outside the rock market at the same time. The combination of an iconic rock band and flying planes is irresistible!”

Jeff Coghlan, founder and MD at Matmi, says that creating the “Flight 666” advergame had been tremendous fun: “Translating such an innovative and exciting tour into an advergame gave us lots of scope. Most Maiden fans are computer-savvy but we’ve been quite generous with time limits and lives so that they can keep on playing!”

“Iron Maiden: Flight 666” is released on Monday 25th May 2009 on EMI Records, on Blu-ray, 2-DVD set and live double action soundtrack album. The game is out now - play it here. Check out more about the tour film and live album on Iron Maiden’s website.

This 10 level, increasingly challenging game is based on Iron Maiden’s “Somewhere Back In Time” tour, set in five of the countries visited by the band: Australia, Canada, India, Japan and Mexico. Your task is to successfully negotiate the band’s tour plane (real call sign “Flight 666”) through the levels, dropping speakers to get the whole world rocking. Familiar characters and sights appear throughout the game – gauchos and geishas, the Taj Mahal and Sydney Opera House, for example.

The more speakers you drop, the more points you earn for your high score – to take on more fuel, boost engine power or increase the power of the speakers still on board. Completing each level earns a stamp in your Iron Maiden passport and at every second level, the game unlocks a free trailer for the film.

In a new twist on the high score table, players can submit scores at any point in the game, repeat a level or complete the game as usual. Until 3rd July 2009, players also get the chance to win exclusive tour embroidered stage gowns as featured in the film via the weekly competition embedded in the game. The game is available in English, Spanish and Portuguese, translated in-house by Matmi.

Since 2001, Matmi has pushed the boundaries to encourage brands to engage directly with consumers online. Its interactive branded entertainment has worked magic for the likes of ASDA, Comic Relief, Football Superstars, EMI (Lily Allen), ITV and Universal Music.

Matmi’s work has won recognition from the BIMAs, the Chip Shop Awards, DADI Awards, Green Awards, Eurobest and the Golden Awards of Montreux amongst others. MD and founder, Jeff Coghlan, has even been described as “one of the world’s leading digital minds”. See for yourself - experience our website at www.matmi.com.

This press release was distributed by ResponseSource Press Release Wire on behalf of Matmi in the following categories: Media & Marketing, for more information visit https://pressreleasewire.responsesource.com/about.