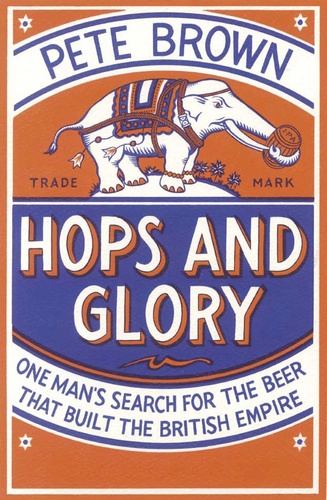 SEND YOUR DAD ON THE JOURNEY OF A LIFETIME
THIS FATHER'S DAY
(he doesn’t even have to leave his armchair, and it’s even better if he has a beer in his hand!)

For the perfect gift this Father's Day, look no further than Hops & Glory, the hilarious new action-packed, fact-filled book from award-winning author Pete Brown:
• The definitive history of India Pale Ale
• The chaotic recreation of its 18,000 mile sea journey
• The shocking truth of the drink-sodden Raj

Hops & Glory is one man’s quest for the beer that built the British Empire, and sees Britain’s best beer writer Pete Brown take a keg of India Pale Ale from Burton-on-Trent via canal (he fell in), cruise ship (the keg exploded), tall ship (he fell in love) and container ship (he went mad) to Calcutta.

Taking in the raucous history of the hard-partying Raj and first class travel writing, Hops & Glory is one of the most entertaining books of the year and guaranteed to engage every armchair adventurer and wannabe swashbuckler!

• ‘Wildly informative on the history of beer and laugh-aloud funny.” Independent on Sunday

• ‘Over 300 bars later and the man still manages to make you laugh.’ Daily Mirror

• ‘A clever bloke who understands his subject.’ Sunday Telegraph


For further information and interviews please contact Dusty Miller on 020 7014 6188 or d.miller@macmillan.co.uk

About the author:
Pete Brown was born in 1968 in Barnsley, South Yorkshire. Since 1991 he has worked in advertising, specialising in marketing beer. He has appeared regularly on television as a beer expert, writes on beer for a variety of publications and is the author of Man Walks into a Pub and the award-winning travel book Three Sheets to the Wind. He lives in London.