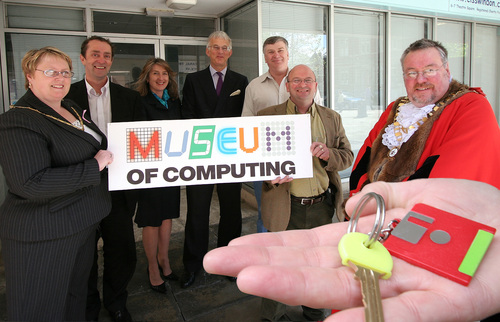 The UK’s first dedicated Museum of Computing that was forced to close temporarily in Spring 2008, has today been offered a three year lease on new premises in Swindon’s town centre by Swindon Borough Council. Numbers 6 & 7 Theatre Square is 30 metres from the town’s brand new Central Library and 50 metres from the Wyvern Theatre in ‘The Promenade’; a section of the town designated by The New Swindon Company as the cultural area in Swindon’s regeneration plan. The museum will reopen to the public in July.

According to museum founder Jeremy Holt, who campaigned for thirteen years to get the Museum of Computing off the ground in 2002, this new location is ideal because ‘Our last venue in the University of Bath was very difficult to get to without a car. The Council’s new offer puts the Museum in the heart of the town in a prominent place near bus routes. It will be good for the town because the collection of 2,500 items demonstrating Britain’s role in the advances of technology has attracted worldwide interest. We attract 2000 visitors a year from over forty different countries. Our new home means we can attract many more local visitors.’ He adds ‘We’re also delighted the three year lease means the Museum can apply for professional accreditation by the Museums and Libraries Association.’

Museum Curator Simon Webb (pictured on left) has a passion for gaming and says ‘Our Gaming exhibitions have been our most popular and we’ll be able to give the public what they want – entertainment and a trip down memory lane! 80% of the collection is in working order and the history of gaming can be traced back thirty years. We’ll be setting up championship league tables and are investigating the possibility of online competitions with other towns which should help put the town on the map.’

Sponsored by Intel, the multinational computer chip manufacturer with European Headquarters in Swindon, and IT PR firm Blue Click PR, the new Museum of Computing will have considerably more display space to house the main exhibition and themed exhibitions which change twice a year. Blue Click PR’s Managing Director, Rhona Jack says ‘When the Museum’s closure was announced last year, the website received over 56,000 hits in 48 hours as well as letters to the Times newspaper, so we know there are many ‘techies’ out there who care about the history they helped create. Many items have featured on BBC’s World Service, CNN, SKY TV, ITV, regional TV and radio stations and national newspaper features list the Museum of Computing in the top 25 places to visit in the country, so its good reputation is building. We were also delighted The Right Honourable, The Mayor of Swindon, Cllr Steve Wakefield handed over the keys to us on his last day of official engagements, as he has much to support the development of Swindon’s cultural heritage in his year in office.’

Jeremy Holt specialises in IT law and is a founding partner of local Solicitor’s firm, Clark Holt. He adds ‘All technological breakthroughs are only possible because of what has gone before and we’d like to hear from technology related groups who need a place to meet as we want the Museum to be a resource for the local community. ‘Wired West’ and the Linux and Ubuntu user groups have already expressed an interest in holding regular meetings here. We look forward to hosting more industry events, allowing companies to showcase new developments here.’

The Museum is currently planning its special events calendar and particularly wants to hear from IT companies who can give talks about different aspects of computing, as well as schools, whose visits could focus on curriculum areas such as ICT, mathematics, design and technology, business studies and 20th Century social history.

For further details or to offer to help with putting together an exhibition or becoming a volunteer, see www.museum-of-computing.org.uk or call Simon Webb on mobile +44 (0) 7834 375628.

The museum is devoted solely to the history of the development of computers. This initiative is being supported by the Science Museum in Wroughton, the British Computer Society and Swindon Borough Council. The Museum has a collection of around 2,500 exhibits and accepts donations of suitable machines. Its function is to act as a showcase for outside exhibitors. The first exhibition was presented by Bletchley Park Trust. The Museum is keen to show former products of commercial computer companies, and welcomes such offers. www.museum-of-computing.org.uk