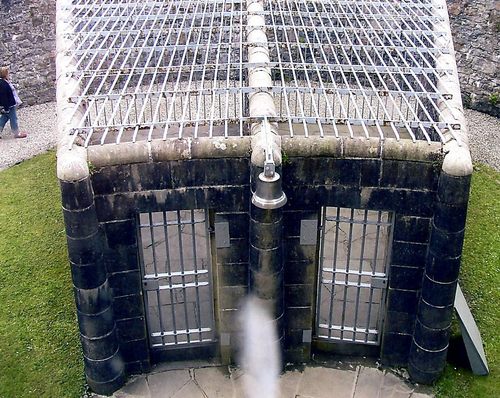 A snapshot taken by a visitor to Inveraray Jail in Argyll has fuelled debate over whether the almost 200-year-old court house and prison is haunted.

The jail, which is recognised as one of the spookiest places in Scotland, is a popular destination for paranormal investigators, including the team from tv’s Most Haunted who recently spent a night at the jail.

Over the years many visitors to the former prison by the side of Loch Fyne in Argyll have complained of uneasy feelings, strange noises and, in some cases, taken photographs which later show unexplained images.

As the County Court anyone from the surrounding area sentenced to prison or transportation would have spent time in the jail where children as young as seven could be detained for minor crimes and subjected to whippings or pointless manual labour.

“The place in the prison that most people react to is cell 10. It doesn’t tend to be something people see so much as a feeling they get there. During the height of the X Files days we used to call it Cell X for obvious reasons,” said Gavin Dick, manager of Inveraray Jail.

“In the kitchen, which is in many ways the most unremarkable room we have had people sense that there’s someone cowering behind the door. There are various areas that cause reactions, and not just on ghost hunts.”

One woman, who visited the jail with her husband and young daughter, complained of having sensed an ‘unsettling presence’ in the prison and was surprised to discover a blurred image in one of her photographs which she didn’t notice when the picture was taken.

”We found the jail very interesting but for myself very scary,” she wrote to prison staff after the event.

”I felt really ill in the old jail. As soon as I walked in my chest tightened and I felt very sick and dizzy.

”I felt as if someone was with us all the way round and was watching us. I couldn’t wait to get out.

”When we got back to our guest house we looked at our photos and to our amazement there is a misty figure standing between the airing cells [in the court yard].

”We cannot explain things but we felt very strange. There is definitely something there. If we were uneasy in the daytime what must it be like at night in the pitch black?”

EVP, made famous in the film White Noise starring Michael Keaton, are electronic recordings that reveal sounds resembling words which many paranormal investigators interpret as the voices of ghosts.

George Allison, 61, a works manager from Glasgow, who took part in a recent ghost hunt at Inveraray jail is convinced he caught a voice on tape.

“People were talking about a ghost which had been running about in the corridor poking people in the back. When I asked if there was anyone there, and if they had hit someone, we could clearly hear a voice say ‘yes, I have’ when the tape was played back.”

This press release was distributed by ResponseSource Press Release Wire on behalf of Peppercorn PR in the following categories: Entertainment & Arts, for more information visit https://pressreleasewire.responsesource.com/about.