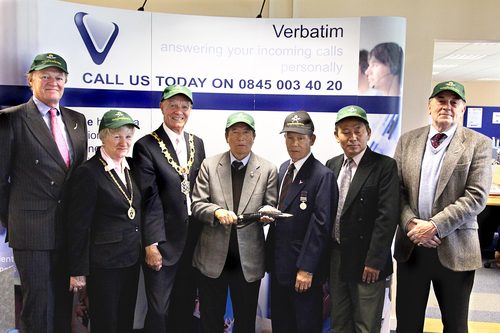 How small firm Verbatim is attempting to raise big money for our valiant heroes.

The Gurkhas may have won the battle in parliament but they may still have to face months of living in desperately poor conditions. With some men and their families having to share one room with up ten men, Verbatim, a Newbury based call centre has teamed up with the Forgotten British Gurkha charity in an attempt to put a stop to it.

The Forgotten British Gurkha foundation is aiming to raise half a million pounds to purchase a residential centre where the Gurkhas and their families can live in dignity before settling in the UK.

Verbatim are supplying a telephone reception service and a credit card donation line, as they "do their bit" for some of our nation's most loyal soldiers.

Graham Hill, director of Verbatim said “We are delighted to offer our services to support these brave men and their families who served our nation with great honour. We take calls on behalf of a variety of different companies, from one man bands to large blue chip corporations so we are fully equipped to take donation calls for the Gurkha charity. The charity can now have peace of mind that every call will be answered, to ensure they don’t miss a donation.”

Paul Keddie, the director of the charity comments “The Gurkhas and their families have to live in appalling conditions. The money we are trying to raise will enable us to give them better living conditions until all the red tape is completed.”

To support this charity and help build a suitable residential centre, please call the Verbatim donation line on 0845 003 9958 and donate whatever you can. Every £20 pledged will help towards the £500,000 target."

Verbatim is a call centre based in Newbury founded in 1997 to provide a professional, business friendly outsourced reception and call answering service for SME's.

Now 12 years on we represent over 550 clients answering nearly half a million calls a year for independent professionals, SME's, the professions and large blue chip organisations.

About: The Forgotten British Gurkha charity.

The Forgotten British Gurkha charity was set up less than a month ago. The charity has been supporting a number of veterans by finding accommodation, funding living expenses and equipping their bedsits.

From left to right