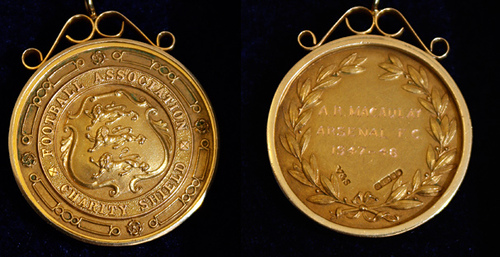 Lot 100 is a 15 carat gold medal awarded to Archie MacCauley who was an almost ever present player for Arsenal between 1947 and 1950, making a total of 108 appearances for the club, as well as seven appearances in the Scotland side.

In 1957 he succeeded Tom Parker as manager of Norwich City, where he led the Third Division side to the FA Cup semi-finals in 1959 in one of the most famous FA Cup runs of all time, and promotion to the Second Division the following year. In 1961 he moved on to West Bromwich Albion, though the Baggies did little under his two-year reign, instead enjoying mid-table obscurity.

Macaulay finished his managerial career at Brighton & Hove Albion between 1963 and 1968, leading the club to promotion from the Fourth Division in 1965. After that, he left football management completely. He died in June 1993, aged 77.

A spokesperson at Cameo confirms that this rare piece has been placed at auction by a member of the family.

For more information contact the auctioneers directly on or via email at office@cameo-auctioneers.co.uk

The Cameo Web Site contains a full online auction catalogue for every sale and live bidding is accessed at www.the-saleroom.com/cameo. Cameo’s sale rate is an impressive 92% of all lots, so if you have anything you would like valued for inclusion in a future sale you can do this by phoning 0118 971 3772 or emailing a digital photo and description to office@cameo-auctioneers.co.uk

Of course if you like to attend the auction that’s no problem either. Cameo’s Auction rooms are situated just outside of Midgham, near Reading, and the public are welcome to attend the auctions. If you visit the web site you can subscribe to the free Auction Alerts system that keeps you informed about upcoming sales and interesting lots.

Cameo Auctioneers is an established Fine Art Auctioneers with Auction Rooms near Reading. The company uses online marketing methods to attract quality buyers from all over the world for its specialist sales which are held live in the Auction Room and on the Internet simultaneously.

Recent developments at Cameo have seen the introduction of live internet bidding for their major sales, combined with regular email auction alerts letting people know when the forthcoming sales are taking place. In addition Cameo use the Google Adwords system to advertise the web site in a multitude of countries around the world.