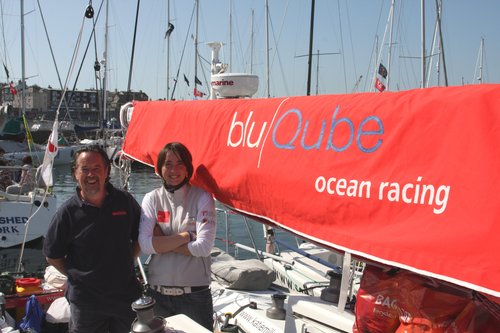 Bristol, 5th June 09 – Promising young solo sailor Katie Miller and her Figaro boat, bluQube has travelled over 1,600 miles so far on her voyage in this year’s OSTAR transatlantic race. Currently positioned 6th, Katie aged 22 is the youngest ever female competitor and hopes to reach Newport, Rhode Island by 15th June a total of 22 days, covering a total of 3,000 miles since leaving Plymouth on the 25th May.

Katie comments on the trip so far, “Since the start we’ve had all sorts of weather thrown at us from 35 knot winds to dead calm. The strong north-westerly winds have meant we have been able to sail a lot faster than we could have imagined. It’s always exhilarating (but to be honest a bit scary) to hear bluQube hum and hurtle through the seas. I can certainly say I will never again call it ‘the Pond’ because it definitely is not! I knew the OSTAR was going to be hard, but this has been harder than I imagined, pushing me to new extremes.”

“Much of my time has been spent bailing out water, around two hours a day, and I can’t forget that Clare Francis spent half her time watching water pour in and the other half bailing it out. When the weather has been more forgiving I’ve been able to catch up on sleep, averaging five hours a day, watching DVDs and reading books such as Dawn French’s ‘Dear Fatty’ which unfortunately has given me a huge craving for pizza which I hope to satisfy when we finally hit the good old US of A.”

CEO at financial management software vendor and sponsor bluQube, Simon Kearsley commented, “Taking into account that this is Katie’s first OSTAR her performance so far is incredible. She has managed to take bluQube to record speeds and really pushed it to its limits. Katie has also revealed what a canny sailor she is too. Her decision to take a more southerly route than her fellow competitors appears to have paid off. We are looking forward to the second half of what is turning out to be a very exciting race.”

Currently Katie and bluQube, who are currently the furthest South of all the competitors, are experiencing light winds and sunshine, giving Katie the opportunity to make some much needed boat repairs including the vang (holds the boom up), the kicker (pulls the boom down) as well as drying out bluQube and sorting out food supplies such as sardines, powdered milk, pasta, freeze dried curries, muesli, milkshakes, fresh fruit, rice and chocolate raisins!.

About Symmetry:
Established in 1996, Symmetry is a software company that specialises in the development and supply of business-to-business financial solutions within the UK. The company’s core product, bluQube, is a fully integrated financial and management accounting solution aimed at organisations ranging in size from £3M turnover to £250M turnover and with user populations from 2 to 800+ users. www.bluqube.co.uk

About Katie Miller:
Katie Miller first took up sailing in 2000, during a family holiday in Greece, and is now viewed as one of the UK’s most promising young sailors. Katie was awarded the YJA Raymarine Young Sailor of the Year Award at the London Boat Show in 2007, in recognition of her solo circumnavigation of the United Kingdom that raised £10,000 for the Ellen MacArthur Trust.

In 2008 she competed in, and won, her first major single-handed race, the “bluQube Solo 1000”, the official qualifier for the OSTAR. Following her success, Katie secured a two year sponsorship deal with financial management company bluQube, with them as title sponsor,
which was announced in February 2009.

Juggling her time at Southampton Solent University, where she is studying Yacht Production and Surveying, Katie is a member of Lee-on-the-Solent sailing club. After taking part in OSTAR 2009, Katie’s ultimate ambition is to compete in the 2016 Vendee Globe following in the footsteps of Ellen MacArthur, Dee Caffari & Sam Davies.
www.katiemillerracing.com