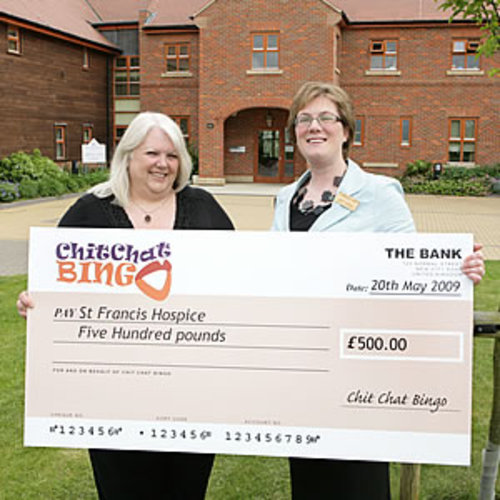 Popular online bingo site Chit Chat Bingo has granted a wish for a charitable donation to one of its players, who went on to win a whopping £61,280.57 progressive jackpot.

Chit Chat Bingo made a £500 donation to the Hospice of St Francis in Berkhamsted, Herts, as a part of its Wishing Well promotion which allows players to make a wish every time they deposit money to their account. Regular player 'beaniebabe' made a wish for the donation to help support the hospice staff and volunteers who cared for her friend, before she passed away in February 2009.

"I wished for the donation because I wanted to give something back to the place that had given such good care to my life long friend during her final days," said 'beaniebabe', who lives in Hertfordshire. "They also gave such good support to the family and loved ones and I wanted to help them continue their great work."

'beaniebabe' went on to win £61,280.57 on June 3 playing Chit Chat Bingo's jackpot game Chain Reactors. "I can't believe it. I am still numb. Right after I won, I phoned the VIP department to ask them to please confirm the balance in my account and even still it doesn't seem real. I am speechless which is very rare for me."

Chit Chat Bingo is the first online bingo site to make a donation to the Hospice of St Francis in Berkhamsted. "On behalf of the team here at the Hospice of St Francis, I am most grateful to Chit Chat Bingo for granting beaniebabe's wish," said Fundraising Director Sarah Thompson. "Donations like this are so important since it costs us £3 million each year to run our services and we receive only 20 per cent of our funding from the NHS. I am so pleased that we were able to help beaniebabe's friend when she needed us – and with the donation from Chit Chat Bingo helping our fundraising efforts, this ensures we will be able to provide our services for others."

'beaniebabe', who has been a Chit Chat Bingo member since January 2006, praised the online bingo site: "I have been with Chit Chat Bingo since it started, because it is such a friendly place to play at and the team behind the site is so nice. I hope my wish ensures that others will receive the tender and loving care that my friend got at the Hospice."

Chit Chat Bingo hosts one of the largest online bingo communities in the UK and has paid out over £110 million to over 200,000 registered players. Chit Chat Bingo is known for its friendly chat rooms, huge bingo jackpots and fantastic player promotions.

The Hospice of St Francis in Berkhamsted was founded in 1979 and employs 65 nurses, six doctors and four therapists, as well as catering, fundraising and administration staff.

The Hospice works with patients suffering terminal and life-limiting illnesses, and their families, carers and loved ones.

The Hospice relies heavily on volunteers for fund-raising and roles within the Hospice.

Chit Chat Bingo was launched in January 2006 and it has since paid out over £110 million to over 200,000 registered players.

Chit Chat Bingo welcomes all new players with a free £1 upon registration and also matches new players' first deposit up to £125.

Chit Chat Bingo is brought to you by Goldbond Marketing in conjunction with St Minver, the world's biggest bingo network and the leading supplier of fully-managed gaming solutions to high profile partners.