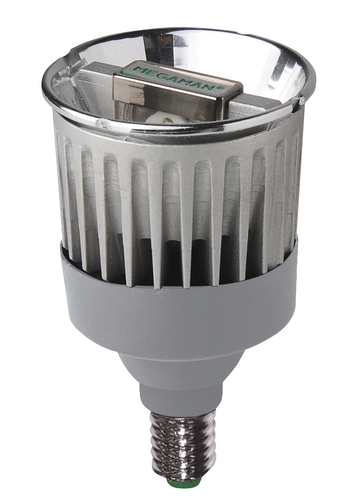 The new range uses a totally new design concept to ensure that very high directional light levels are produced from a small array of LEDs consuming tiny amounts of electrical power. For example a newly launched 7 Watt Megaman LED Reflector produces the light equivalent of a traditional 35 Watt halogen spotlight. These lampsalso have a rated life of around 20,000 hours, far exceeding both conventional (incandescent) and halogen lamps.

Based on over 10 years of research and development, these ground-breaking lamps are a direct one-for-one replacement for halogen spots in terms of both colour temperature and intensity, but with energy savings of up to 80%. The new range looks set to become a benchmark for interior and lighting designers, as it represents a significant leap forward in current LED lamp performance.

The new LED Reflectors are available as direct replacements for GU10, Par 16, Par 20, Par 30 and AR111 type halogen lamps ranging from 35W to 75W, and offer significant savings in installed electrical load as well as energy consumption. Initially they will be available with GU10, SES, and E27 fitting arrangements, with additional new formats to follow shortly.

With a rated life of 20,000 hours there are also considerable savings possible in replacement costs. Megaman claim that the average cost of ownership shows a payback in under 4000 hours operation, making a change from traditional halogen spotlights to LED Reflectors now very affordable and sensible for the environment.

The clever design of these lamps is based around an innovative vertical array of LEDs mounted back to back to generate as much of a point source as possible within the reflector, thus increasing efficiency and light output. So these lamps are very bright, and offer a colour tolerance of just 100K shift in colour temperature – compared to an average of 800K for most other LED based lamps.

Another common problem with existing LED-based lamps – heat generation – has been overcome by incorporating a patented heat sink arrangement (called TCH - or Thermal Conductive Highway). They therefore achieve outstanding heat dissipation – in fact the LED chip can be touched by an unprotected finger during operation without danger of burning. The very light weight of the heat sink arrangement also means that the lamp will not tilt when installed in track spots.

“This new range represents a major breakthrough in LED lighting, as it solves a number of key issues that have so far limited the take-up of these light sources in consumer applications. The result is that we have minimised energy consumption and heat generation, while maximising operational life and delivering three times more light output than other LEDs for the same wattage. We think they are going to be very popular replacements for halogen bulbs.”

Megaman’s new LED Reflector Range will be shortly available from electrical wholesalers, lighting shops and various Internet suppliers throughout the UK and Ireland. Local suppliers and stockists can be found at : www.megamanuk.com