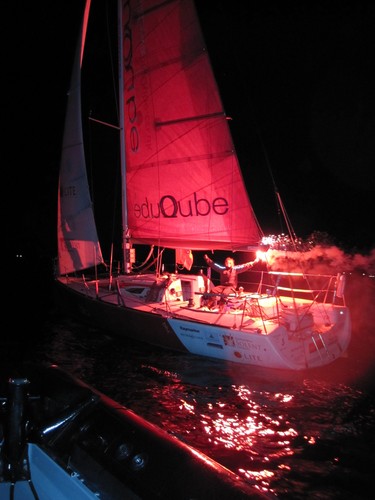 Finishing 9th out of a total of 34 starters, Katie Miller commented on completing the race, “I’m absolutely thrilled to have finally made it across the finishing line, which proved particularly elusive towards the end with the wind blowing me backwards. It’s been an amazing trip and although the three weeks seemed a long time at sea, now I’ve finished, it seems really short.”

Asked about the highs and lows of the race Katie said, “After 18 months of hard work and preparation, today the feeling of actually making it here is certainly the most exciting and the most surreal. Looking back now, all I can remember are the good days although Day 13, unlucky for me, was probably my lowest point because of the breakages on the boat and a lost opportunity of gaining a few extra places on the leadership board. But overall it has been awesome - what with the 35 knot winds, the dolphins, the gannets and of course the ‘almost international sea rescue’ when my EPIRB (emergency radio beacon) went off by accident because it got wet. Already I can’t wait to get back on the water, especially as I know that most of the other races will, unlike the OSTAR with its chill factor and icebergs, be predominantly down-wind and warm!”

Katie will spend the next few days getting both herself and bluQube clean, celebrating, chilling out and enjoying some Uncle Sam cuisine. “After a diet of Sweet and Sour, Chilli, Curry and Stew I’m looking forward to something a bit more substantial like Pizza which I’ve been dreaming about for the last three weeks!”

CEO at financial management software vendor and Katie Miller’s title sponsor bluQube, Simon Kearsley commented, “For a first transatlantic crossing Katie has performed exceptionally well. Finishing in the top third was impressive enough but to achieve this in such a small boat at just 33ft is also admirable. Despite having to cope with many obstacles along the way, from ferocious storms to broken rudders, Katie demonstrated real strength of character and a dogged determination to carry on regardless. This is the kind of pragmatic approach that is shared by many successful solo sailors. The OSTAR has certainly proved a significant stepping stone to the rest of her career.”

Katie’s next event with bluQube will be taking part in the RORC Channel Race in Cowes Week. Longer term Katie has ambitions to compete in the 2016 Vendee Globe following in the footsteps of famous female sailors such as Ellen MacArthur and godmother to her boat bluQube, Dee Caffari.

Telephone interviews with Katie Miller are available on request. Please contact Jane Moores on jmoores@ttauk.com or call 0845 658 0120. To read Katie's blogs from the trip visit: www.bluqube.co.uk/oceanracing/blog.asp

Katie Miller first took up sailing in 2000, during a family holiday in Greece, and is now viewed as one of the UK’s most promising young sailors. Katie was awarded the YJA Raymarine Young Sailor of the Year Award at the London Boat Show in 2007, in recognition of her solo circumnavigation of the United Kingdom that raised £10,000 for the Ellen MacArthur Trust.

In 2008 she competed in, and won, her first major single-handed race, the “bluQube Solo 1000”, the official qualifier for the OSTAR. Following her success, Katie secured a two year sponsorship deal with financial management company bluQube, with them as title sponsor,
which was announced in February 2009.

Juggling her time at Southampton Solent University, where she is studying Yacht Production and Surveying, Katie is a member of Lee-on-the-Solent sailing club. After taking part in OSTAR 2009, Katie’s ultimate ambition is to compete in the 2016 Vendee Globe following in the footsteps of Ellen MacArthur, Dee Caffari & Sam Davies.
www.katiemillerracing.com