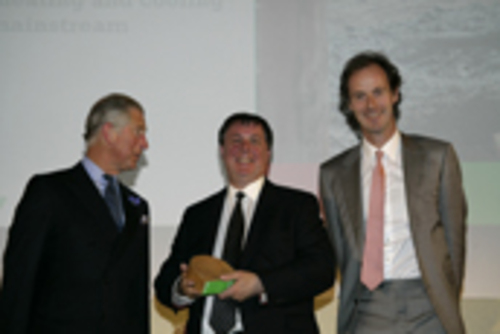 Groundbreaking green energy company Geothermal International has won a prestigious award in recognition of its contribution to combating climate change.

The Coventry company, which installs systems that use the heat in the ground to warm and cool buildings, won the Business Award at the Ashden Awards for Sustainable Energy 2009. The awards are an internationally recognised yardstick for excellence in the field of sustainable energy.

In receiving the award from Prince Charles at a ceremony in London, Geothermal International joined a select band of just 35 UK award winners since 2001.

Geothermal International's installations have saved 25,000 tonnes of carbon dioxide emissions per year since the company was founded eight years ago, compared to emissions that would have resulted had conventional heating and air conditioning systems been used.
A spokeswoman for the Ashden Awards said: "Our winners are passionate about bringing change to their community and the planet. We hold up our winners as a shining example of green energy in practice. The world needs new ideas and ambitious approaches to tackle the growing energy crisis, encroaching climate change and the unequal social impact of these problems."

"Our winners are remarkable people who have dedicated themselves to finding solutions to these complex problems."
Patrick Sherriff, Geothermal International’s Sales and Marketing Director, said: "We are absolutely delighted to have won this internationally recognised award. It shows that we are at the cutting edge of finding solutions to the difficult problem of providing sustainable energy on a commercial scale"

"The award is an achievement for everyone working at Geothermal International, and it places our business firmly on the international stage. The challenge now is to continue to be the best at what we do."

Geothermal International, which is based in Albany Road, Earlsdon, Coventry, installs ground source heat pumps in large commercial and public sector buildings. The firm provides a one-stop shop for the technology – from geological assessment of the site through to borehole drilling and ground loop and heat pump installation.

A heat pump works like a refrigerator in reverse, pumping heat from a renewable source outside a building to warm the interior. The external heat source is usually the ground or a body of water, although air can be used. For every unit of electricity used to power the pump, more than 3.8 units of heat are supplied. Additionally, the pump can operate as an air conditioner, cooling the building by transferring heat back into the ground or water. Many of Geothermal International’s new urban developments use innovative ‘Energy Piles’, where the pump’s ground loop is integrated into the building’s foundations, making installation easier and cheaper.
Geothermal International has designed and installed 80% of the commercial ground source heat pump systems in use in the UK, and has constructed some of the largest ground source heat pump installations in Europe, including at Mansfield Hospital.
As well as significantly reducing clients’ carbon footprints, Geothermal International’s systems can save tens of thousands of pounds a year in heating and cooling bills. Ground source energy generation systems can reduce building heating and cooling running costs by up to 70% and reduce carbon emissions by up to 50%.

Geothermal's latest honour comes after it recently earned the Environmental Initiative of the Year title at the H&V News Awards, which recognise the best in the heating and ventilation industry, and rewards companies for their skill and innovation.
The firm also won the Green Credentials Award at the Fast Track 100 Awards dinner, in recognition of the firm's rapid growth and innovation.

ENDS
Editor’s Note:
Geothermal International (GI) is a specialist in the installation of Ground Source Heat Pump (GSHP) systems to heat and cool buildings and has enjoyed impressive growth since its launch in 2000.

The company has built a unique position within the GSHP sector, designing and installing 80 per cent of all UK GSHP systems. Its status was further recognised in April 2008 when Scottish and Southern Energy Plc took a 20 per cent stake in the business.
GI employs 70 people in roles including mechanical/project engineers, designers and hydro geologists and operates a flat organisational structure to ensure flexibility of response and good communications.

It can manage more than 70 projects at any given time and, by employing native speakers, can conduct business in any one of 10 different languages