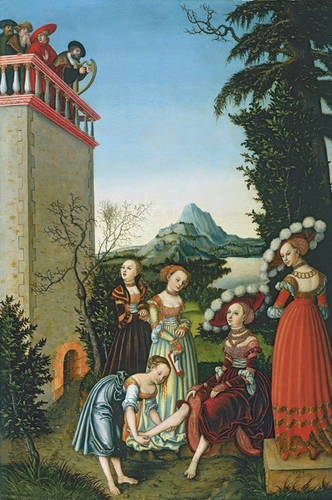 • A gallery talk on Cranach and his influence on modern masters followed by a tour of Old Masters on display by Jeremy Howard, Colnaghi’s Head of Research at Colnaghi on Monday 6th July, 1-2 pm

• Publication of a commemorative catalogue on Cranach by Jeremy Howard, which illustrates some of the masterpieces sold by Colnaghi and Bernheimer over the past 15 years and explores Cranach’s influence on later masters

Dürer and Holbein have long been recognised as great German Renaissance masters, but it has taken five hundred years for the British to recognise the importance of Cranach. Despite Prince Albert’s enthusiasm, he was surprisingly little known in Britain in the nineteenth century and Friëdlander’s 1932 German monograph on the artist was not translated into English until 1978. It was only two years ago, in 2007, that the first British exhibition of his work was held at The Courtauld Gallery, and not until last year that the Royal Academy hosted the first monographic exhibition in this country to give any sense of the range of his work. Despite this general neglect of Cranach by the artistic establishment in Britain, Cranach is a great favourite among contemporary artists and was a notable inspiration for Picasso and the German Expressionists. Konrad Bernheimer, one of the sponsors of last year’s Royal Academy exhibition, has long championed his work. During Master Paintings Week (4th – 10th July) Colnaghi will be commemorating Colnaghi-Bernheimer’s association with Cranach’s work, by the publication of a catalogue which surveys some of the masterpieces handled by the firm in the last fifteen years and by showcasing two of the finest examples of Cranach’s works on the open market: David & Bathsheba and The Virgin of the Grapes with the Standing Christ Child. The “artist-in-focus” exhibition will also include one of Cranach’s early woodcuts, some prints by Picasso which were directly influenced by Cranach, and a rare photograph of the interior of Picasso’s studio showing a Cranach composition in the background. Jeremy Howard, Head of Research at Colnaghi, will give a lunchtime gallery talk on Cranach and how his style has influenced some of the Modern masters followed by a tour of some of the master paintings on view in the gallery. This gallery talk will start at 13:00 on Monday 6th July at Colnaghi, 15 Old Bond Street, London W1. An illustrated catalogue by Jeremy Howard will be available, which surveys eight important paintings sold by Colnaghi-Bernheimer and two currently for sale, as well as examining changing critical attitudes to Cranach and his influence on later masters such as Picasso, Kirchner and John Currin.

Konrad O. Bernheimer said: ‘Cranach has long fascinated me, but during the last 15 years, when I have been privileged to handle some really great paintings by this master and his workshop, he has remained, in my view, perhaps the most underrated of the great early German painters, particularly in the Anglo-Saxon world. As a dealer who has handled some of the best Cranachs to have come to market in recent years, I am proud to have played some part in that process of revaluation, both through supporting with my business Katrin Bellinger last year’s major Anglo-German collaboration between Städel Museum, Frankfurt and the Royal Academy, and through communicating my enthusiasm to clients.

Cranach: Artist in Focus will be on display to coincide with the augural event – Master Paintings Week, held in London 4th – 10th July. Twenty-three of London’s top dealers join forces with Sotheby’s and Christie’s to stage a week of special exhibitions, events and lectures in their gallery in Mayfair and St. James’s. All galleries are open Saturday 4 and Sunday 5 July, 10am – 5pm, and Monday 6 to Friday 10 July, 10am – 6pm.
www.masterpaintingsweek.co.uk
Notes to Editors:

P. & D. COLNAGHI & CO., LTD.
Colnaghi was established by Paul Colnaghi and his partner Anthony Torre in Paris in 1760. The original shop in Paris, known as the ‘Cabinet de Physique Experimental’, dealt in scientific instruments imported from England and they quickly branched out into print selling, importing English mezzotints and barometers. After managing a new shop in the Palais Royale, Paul Colnaghi took over the London branch of the business, based in Pall Mall in 1783, and as a result of the French Revolution transferred the business to London becoming print sellers to the Prince Regent (later George IV). Colnaghi established itself initially as the premier dealership for prints. By the end of the nineteenth century the firm had begun dealing in Old Master paintings and drawings and was instrumental in the formation of some of the most important American collections, including that of Isabella Stewart Gardener, Henry Clay Frick and Andrew Mellon. In 2002, the Old Master paintings dealer Konrad O. Bernheimer, the fourth generation of one of Europe’s major art dealing families, acquired Colnaghi. Under the Colnaghi umbrella, Bernheimer joined forces with the renowned Old Master drawings dealer Katrin Bellinger. In October 2006, Hauser & Wirth opened their third London gallery at the Colnaghi building in Bond Street – Hauser & Wirth at Colnaghi. Bernheimer and Bellinger continue to maintain a presence in Munich, Bernheimer Fine Old Masters, and Katrin Bellinger Kunsthandel. Colnaghi continues to operate as one of the world’s most important dealerships, specializing in Master paintings and drawings from the fifteenth to the nineteenth century.