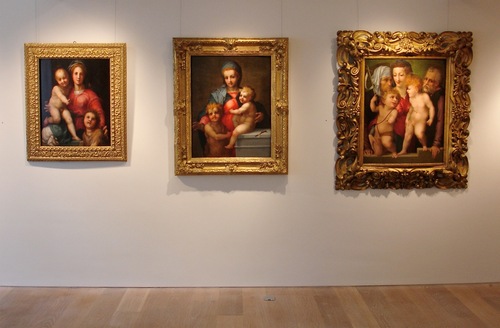 Whitfield Fine Art's forthcoming Old Master exhibition has an exceptional group of paintings from the Florentine High Renaissance, one of the most creative moments in the Italian art history and one which had an impact far afield. It is one of a series of exhibition put on during Master Paintings Week (4-10th July 2009)

The leading highlight will be the comparison between three newly cleaned masterpieces by Andrea Del Sarto and his pupils Jacopo Pontormo and Rosso Fiorentino painted within a few years of each other.

The Andrea Del Sarto “Madonna and Child with St. John” was rediscovered ten years ago, but only in late 2008 was it cleaned and parts of the painting revealed to be completely overpainted in the 18th or 19th century. It has now has it been fully restored, revealed to be in excellent condition and infrared reflectograms have uncovered fascinating underdrawing present on the panel under the paint surface. It is priced at £7.25 million

Painted around the same time, Jacopo Pontormo’s “Holy Family with St John”, was painted as he was in Andrea del Sarto’s studio but as he was beginning to take his first commissions as an artist in his own right. Inspired directly by Andrea del Sarto’s early work of 1513, this panel has been cleaned especially for this exhibition.

We shall be showing two other works by pupils of Andrea del Sarto. The first is by Rosso Fiorentino - so named for his red hair - who also painted the most entrancing Madonnas, and it is fascinating to have his “Holy Family with Saints Joseph, Anne and John the Baptist” as a foil to the Del Sarto and Pontormo, all probably painted within a few years of each other.

To be able to hang these three works together, nearly five hundred years after they had such a close connection, is a fascinating and unique comparison.

Also exhibited is a beautiful panel by Correggio. The Head of the Saviour has recently been the only work not from a major institution in the landmark retrospective held in Parma that closed in January 2009, where it hung next to the celebrated altarpiece called Il Giorno and the Vergine della Scodella. Exceptionally rare and beautiful, it is a real coup to have secured it for this exhibition.

The gem like Madonna by Albertino Piazza Da Lodi was painted around 1515 under the strong influence of Leonardo. It was once owned by Marchesa Casati (1881-1957), a spectacular social figure, painted and photographed by many leading artists of her time, and associated with several outstanding dress designers and jewellers. She knew, entertained and was entertained by many of the most gifted people of her time, including Nijinsky, Picasso, Colette and Chanel. Her affair with the Italian Nationalist writer Gabrielle d'Annunzio was widely publicised. The substantial fortune she inherited was not enough to finance the Marchesa's tastes.

The seventeenth century in the exhibition is represented by pictures whose unfamiliarity is matched by their force of presence.

Sir Anthony Van Dyck’s Head of an Old Man, painted in the first Antwerp period, has hardly been seen in the last generation, having been in a private collection in Belgium for the last 40 years. Recorded in a 1660s Gallery Interior by David Teniers the Younger, now at Schleissheim, it is a picture that may even have come from the collection of Charles Ist at its dispersal after the King’s execution in 1649. It is a work that is not a portrait, but more of a character study, in the line of Annibale Carracci’s penetrating studies, where the artist was able not only to grasp the outward appearance but also the inner soul of the man. It is priced at £1.1 Million

Jusepe de Ribera’s Aesop is one of the original philosophers the artist painted when he reached Rome, and tried to rival Caravaggio in naturalism and chiaroscuro. It has long been in a private collection in Belgium and has been cleaned especially for the exhibition.

The whole-length portrait by Simon Vouet, also painted during his Italian years. It is extraordinary because although Vouet’s initial reputation, and his ease of travel to centres like London, Venice and Constantinople, was based on his facility with portraiture, for which he continued to be in demand in Rome and Genoa, there are singularly few instances of survival of this genre, mostly limited to head and shoulders likenesses.

Established in 1979 Whitfield Fine Art is one of the leading Old Master galleries in the world. After twenty years on New Bond Street we have moved to a new gallery on Dering street.

We have a comprehensive stock of pictures of which a selection are on this site. They range from the fifteenth century right through to the end of the eighteenth century. We are specialists in Italian pictures, yet the gallery's stock is representative of painting throughout Western Europe, from large-scale altarpieces to postcard size landscape studies. We also deal in notable works by 20th century Modern British artists.

The gallery is happy to offer advice to those interested in art - at all levels. Whether it is an already established collection needing a specific work to complement it, or whether it is the search for the first purchase. We advise and act as agents to private collectors and institutions on a commission basis. We also supply and offer consultation on period frames for Old Master paintings.

We have successfully negotiated on behalf of our clients to museums and private collectors, and have sold to many of the great museums of the world including: National Gallery, London; Museo del Prado, Madrid; Los Angeles County Museum of Art; J. Paul Getty Museum, Mailbu; The Metropolitan Museum of Art, New York; Pinacoteca Nazionale di Bologna; Cleveland Museum of Art; Indianapolis Museum of Art; Kunsthistorisches Museum, Vienna; Blanton Museum of Art, Houston; Kunsthaus, Zurich, The Royal Museum of Fine Arts, Antwerp and the National Museum of Western Art, Tokyo among many others.