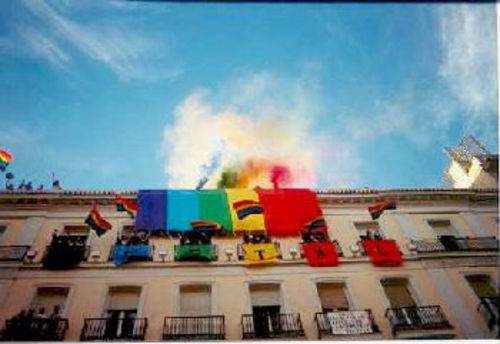 28 June 2009 will mark the 40th anniversary of the Stonewall riots – and, for many, the beginning of the gay pride movement.
Today, the celebration of gay culture has become a global event, with huge pride festivals taking place around the world in June, from Amsterdam to San Francisco.

The top rated gay hostel on HostelBookers, Gay Hostel Puerta del Sol has an excellent central location in Madrid’s Puerto del Sol Square and offers free entry to some of the city’s most popular gay clubs.

In the heart of the action in Copacabana beach, this welcoming gay hostel in Rio de Janeiro attracts a cosmopolitan party crowd.

Lying in the colourful Mission district of the notoriously liberal city, Elements Hostel is clean, modern and affordable.

Opened in 1984, this gay hostel in London is a well-established and sociable base for gay travellers exploring the city.

Whilst many hostels are gay-friendly, the number of hostels catering exclusively for gay and lesbian travellers is rising in the world’s top destinations, particularly in those cities which have a large gay community or annual pride festival.

Although hostels offer cheap accommodation, their main attraction is a sociable atmosphere and the opportunity to meet like-minded people – perfect for gay and lesbian travellers looking to make friends on the road.

This press release was distributed by ResponseSource Press Release Wire on behalf of Hostelworld in the following categories: Travel, for more information visit https://pressreleasewire.responsesource.com/about.