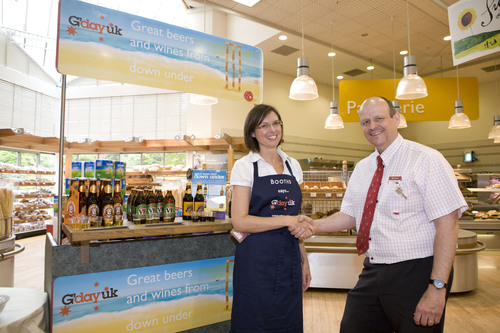 Austrade, the body responsible for the promotion of Australian food in the UK, has joined forces with UK retailer, Booths, to develop an innovative new training tool to help train its staff in-store.

To coincide with G’dayUK, a week-long initiative to promote Australian trade and culture in the UK, Booths has introduced a selection of new boutique Australian bottled beers to its portfolio, as well as running promotions across its Australian wine and beer range.

In what is believed to be an industry first, Australian brewers have overcome the logistical issues of being on the other side of the world by producing podcasts to promote their products in the UK. The podcasts, commissioned by Austrade, will be used to train UK staff in-store and will also be available for consumers to listen to online. The aim is to engage consumers with the newly listed products by hearing all about them, straight from the brewers’ mouths.

The new additions to the boutique beer collection, which hit shelves on 16th June, include Little Creatures from Western Australia, Pikes from South Australia, Cricketers Arms and Grand Ridge from Victoria, and Bluebottle and Red Angus from New South Wales.

Neal Cameron, Head Brewer at William Bull Brewery producer of Red Angus Pilsener said, "The Brewer Podcast concept developed by Austrade has allowed brewers in Australia to overcome the tyranny of distance and talk passionately and directly to the Booths guys who will be selling our beers and via the web, ultimately the customer. It is an awesome concept, beautifully executed."

Kylie Hargreaves, Senior Trade Commissioner at Austrade added: "G'dayUK is a fantastic platform to show the UK consumer the best of what Australia has to offer. Booths' focus on provenance and quality really challenged us to find an innovative way to present the staff with insight into the products in a short space of time. All the brewers were keen to get involved, and we are really pleased with the results. We are confident Booths staff will really engage with the products, and customers will respond well to their enthusiasm."

Food and drink makes up one of four areas being supported by the week-long G'dayUK initiative, the others being trade and investment, migration and tourism. Running from 24th – 30th June, G’dayUK aims to highlight the quality and diversity of Australian food and drink with the UK consumer. (www.gday-uk.co.uk)

For more information on Australian businesses working with the UK, please contact: