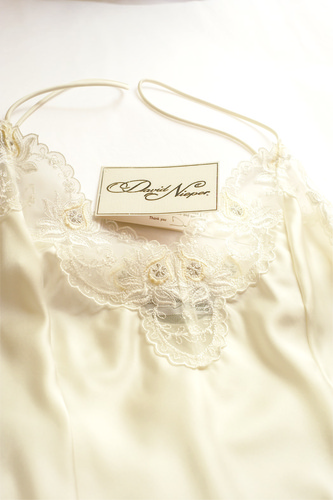 Why made in the UK is still the best

Fashion is showing its patriotic colours this season. The catwalks were awash with nautical themes and now the high street is catching up with rails of red, white and blue clothes. Unfortunately, wearing the well-loved colours of the ‘Union Jack’ is about the only time fashion comes within a nautical mile of being patriotic.

Britain was famously called a nation of shopkeepers by Napoleon, and no-where is this truer than in the fashion industry. Although there remain a few independent fashion houses producing and retailing their own label, such as David Nieper, not one of the high street giants makes their clothes in the UK anymore. They just sell them here. Even Marks and Spencer, the very bastion of Britishness, buys most of its clothes from factories in the Far East, including China and India.

Of course there’s nothing inherently wrong about buying your clothes from anywhere around the world. In theory, third world countries need the export business and we could be helping the poorest people of the world earn a fair wage. But in the real world this isn’t happening. Low wages, appallingly long hours and unlawful living conditions is what’s really happening in many Eastern clothing factories. Despite the growth in organisations like Labour behind the Label calling for ethical trading, these places are still run like sweatshops, often employing migrant workers who have to pay a fee to secure the job in the first place, before earning the equivalent of 40 pence an hour.

What’s been driving this has been the British consumer’s passion for fashion. Too many people’s wardrobes are full to bursting with cheap, disposable clothes. We have become addicted to having the latest must-have accessory and, because they’re cheap, when they fall to bits we just buy more. No wonder there is a serious problem of clothing waste in the UK – last year we discarded 900,000 tons of it. Perhaps a resolution to buy British is the answer for the ethical shopper, yet it is harder than ever to find UK-made clothes.

David Nieper is however, one company bucking the trend. Despite knowing it could reduce its manufacturing costs dramatically by taking production abroad, the company remains fiercely patriotic, dedicated to producing the clothes that it sells from start to finish itself.

Christopher Nieper, managing director of David Nieper says there is growing concern within the UK fashion industry over the use of Third World labour. He believes that times are changing and there will be a backlash against cheap imports. The more people find out about the link between poor human rights and cheap clothes, the less they will want to spend on the high street.

Buying less and of better quality certainly makes sense. Cementing the trend, Jane Shepherdson resigned from Top Shop as brand director last year to join the ethical clothing company People Tree saying: “We can’t carry on buying £2 T-shirts and not ask where they come from.”

“The recession may lead to a preference for higher value clothes that are better made, of superior quality and that will last for years, rather than one season.”

Christopher also predicts that the Credit Crunch will inevitably lead to a growing demand for products made in the UK as people turn to protecting our economy. A recent survey found that across all age groups, 87 per cent of UK consumers said that they would prefer to buy British when offered the choice. The British brand still has an inherent strength and appeal, especially to older consumers – the mainstay of the economy.

99 per cent of David Nieper’s own label clothes are manufactured on its own premises by skilled British workers, many of whom have been employed by the company for many years and who take enormous pride in their creations - each and every item is signed off personally by its seamstress. Given the employees’ years of experience, the attention to detail is exemplary, seams are invisible, lace is dyed to co-ordinate and softened to be kind to even the most sensitive skin. Some customers are actually still wearing clothes they bought from the company, ten, twenty even forty years later.

David Nieper may have higher production costs and lower margins than other companies that have taken their manufacturing abroad but it remains resolute in its decision.

Christopher concluded:
“Our customers like the fact they are buying British and can trust our quality. We use the finest fabrics, our garments are properly made and they fit!”

The founder, David Nieper, is part of the set of fabric supremos which produced names like Jaeger and Viyella. The label was first seen in places like Harrods and the then Peter Jones, although the first full collection was not developed until the mid 60s when it was promoted through David’s own house. This quiet, determined man wouldn’t go to London, stayed put, and with his son Christopher, built his company, and broke all the rules at the same time - no catwalk, no middlemen - the company only sells direct - no cutting corners, but the time, space, and the specialist knowledge to source fabrics, invent pattern techniques, develop the collections.

The label is now known throughout Western Europe.

The company’s HQ and retail showroom is in Alfreton, Derbyshire, and it has offices in France, Germany, Holland and Switzerland.