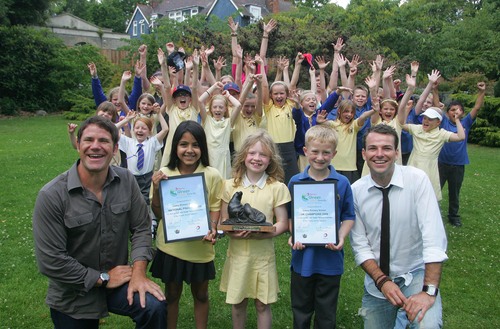 Now in its third year, the TOTAL Green School Awards are a national competition for school children, which aim to generate interest in the environment and to raise awareness of the need for sustainable energy sources. The 2009 awards, which are run by the Young People’s Trust for the Environment (YPTE) in partnership with TOTAL, attracted 341 entries from 17,500 school children within the target seven to 11 age group.

The wining project was the brainchild of 30 pupils aged between nine and 11 years, who created an oasis in the school grounds. In 2007, the children planted a vegetable garden and they have since harvested and shared the produce with their classmates. After this success, the pupils obtained a grant which was used to build a covered outdoor classroom made from home-made cob bricks (a mixture of clay and straw). The children have also planted trees in the school grounds and created a wildlife garden with a pond and beautiful dragonfly mosaic.

The judges were particularly impressed by the very high standard of the Lutley Primary School’s entry and the huge amounts of thought, energy and effort that had evidently gone into the project.

The winners were announced at the national finals held at London Zoo in Regent’s Park, and the pupils were presented with their award by children’s TV favourites Michael Absalom and Steve Backshall.

Michael Absalom said: “I’m thrilled to be a part of these amazing awards and it’s great to see the enthusiasm demonstrated by the quality of the schools’ projects. The pupils are clearly very aware of the environment around them and have submitted some really inspired projects.”

The awards comprise four categories, each allowing group work on environmental topics in a diverse range of subjects including, Art, English, History and Mathematics as well as Science Technology and Geography. From the huge number of entries received, winners for each of the four categories; Totally Active, Totally Clued Up, Totally Creative and Totally Powered Up, were chosen from each of the five regions; Scotland, Wales, Central England, North and South England. The four winners from each region attended a regional final where the national finalists were selected by a panel of judges.

YPTE Director, Peter Littlewood, commented: “After three years of the awards, it is still brilliant to see some of the fantastic ideas young people around the country have come up with. The quality of the entries this year made it extremely hard to choose the winners, but the ‘Super School Grounds’ project from the Lutley Primary School pupils was just inspirational and the pupils thoroughly deserve the prize.”

All students in the winning group receive an all expenses paid Environmental Discovery Course with the YPTE, which comprises a four-night environment adventure exploring the British countryside.

Mrs Cox, Teacher at Lutley Primary School said: “The children were over the moon to make it to the final, but to actually win the National 2009 TOTAL Green School Awards is just fantastic. The children work very hard on their ‘Super School Ground’, alongside many other eco projects, and are extremely excited about the environment adventure trip.”

TOTAL Bitumen, General Manager, Mike Linley, commented: “TOTAL is pleased to be supporting this competition and encouraging young people to take a greater interest in the future of their planet. It is great to see the ongoing enthusiasm demonstrated by the quality of Lutley Primary School’s project, which covers many important environmental issues. The pupils have not only learned something valuable about the environment, they have also brought that message to other children.

The TOTAL Green School Awards competition will run again in 2009/2010. For details on how to enter go to http://www.totalgreenschoolawards.org