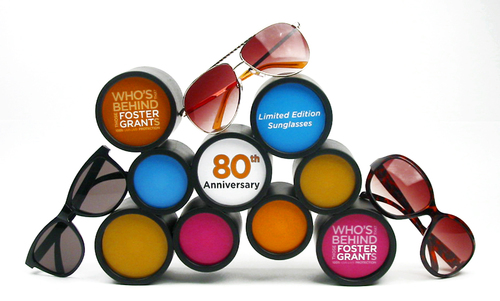 The company credited with the birth of sunglasses and creator of a fashion icon synonymous with style and chic, Foster Grant, celebrates 80 years since the sale of its first pair of sunglasses.

It all started back in 1929, when Sam Foster introduced sunglasses to America by selling the first pair on the Atlantic City boardwalk. In the 1960’s, Foster Grant catapulted to fame with an advertising campaign, “Who’s That Behind Those Foster Grants?,” featuring iconic Hollywood celebrities such as Raquel Welch. Pop and film stars quickly adopted the habit of wearing sunglasses as part of their image and the masses immediately followed. Thus began the correlation between wearing sunglasses and “being cool.”

Foster Grant remains the largest distributor of sunglasses in the world and continues to create affordable, fashionable and on-trend styles that in the UK start from only £9.99, a fraction of the cost of comparable designer brands.

To celebrate the anniversary, Foster Grant UK is giving away a free pair of sunglasses every day in July from its website www.fostergrant.co.uk. Visitors will be in with a chance of winning sunglasses from a limited edition 80th anniversary collection representing styles of the past 80 years.

Images and information from :-