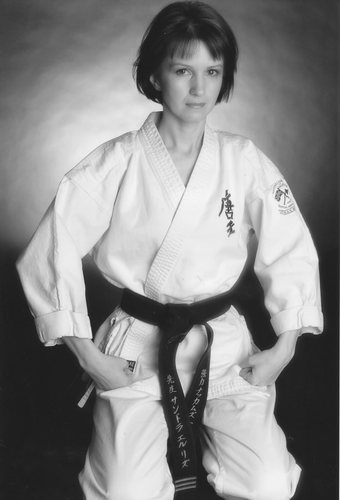 Adversity has been well and truly overcome by Sandra Beale, the National Association of Karate and Martial Art Schools’ (NAKMAS National Governing Body) director of operations, who has just become the first woman in the UK to achieve Shihan (master) status in Tsuyoi Ryu Karate.

Sandra, 41, achieved 5th Dan karate grade within Tsuyoi Ryu which has been part of the UK and international martial arts scene since 1977. Sandra achieved this colossal feat despite suffering two bouts of cancer during her life, and in addition to her tireless 17 years work with NAKMAS National Governing Body.

Sandra said: “It is a great honour to achieve my 5th Dan. I could never have imagined achieving this level. Without the support of my husband and the constant dedication and loyalty of my students, I wouldn't have reached this stage.”

Sandra was diagnosed with a rare form of cancer, Ewings Sarcoma, when she was nine years-old and was told she had a fifty-fifty chance of survival. After surgery, radiotherapy and two years of chemotherapy she survived, but the extensive treatment caused other illnesses, including damage to the heart.

"Not only is Sandra a valuable asset to the NAKMAS team, she is also an inspiration to others faced with adversity, a role model for other women and an example of someone who commits themselves to overcoming any challenge.

"To become the first woman Shihan is testament to Sandra's determination and, add to that what she has achieved for NAKMAS, illustrates her importance to the martial arts in the UK. NAKMAS has taken giant leaps in developing a nationwide strategy for martial arts, and Sandra can take a lot of the credit for being one of the architects of that progress."

Sandra has been practising karate for 18 years. As well as being the national director of operations to NAKMAS she is the joint chief instructor to the Kent Karate Schools (www.kentkarateschools.co.uk), teaching her classes in Ashford and Canterbury, specialising in teaching children, including those with Asperger Syndrome and those with other special needs.

Away from her many martial arts commitments, Sandra's true passion is dance and she has competed in professional dance competitions since she was four years-old. She continues to dance, practising and teaching alongside her father, Alan Beale.

Sandra is also an academic and attained a Master of Arts in Education from the University of Kent. She is about to commence study for a Doctorate in Education at the Sheffield Hallam University, specialising in autism within sport and physical activity.

The National Association of Karate and Martial Art Schools (NAKMAS) National Governing Body is a non-funded national governing body and is a member of CCPR (the Central Council of Physical Recreation). With its Head Office based in Kent, NAKMAS governs all forms of traditional and modern martial arts and has over 73,000 members within the UK.

NAKMAS is an approved insurance provider via Zurich and holds a National and International Quality Standard Certificate via the BSI (British Standards Institute). NAKMAS has also been accredited to the Equality Standard: A Framework for Sport.