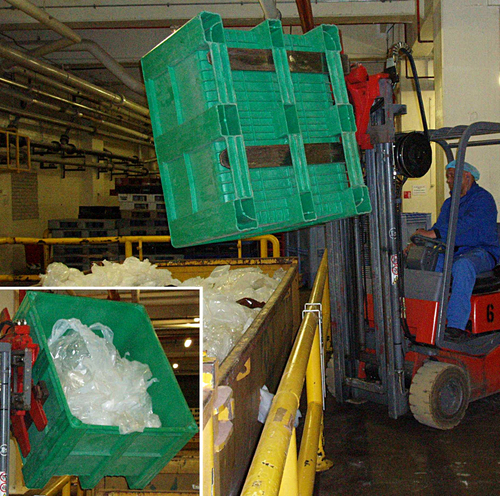 All of Kellogg’s Corn Flakes, Rice Crispies, Frosties, Crunchy Nuts and CoCo Pops sold in the UK and Ireland are put in packets in Manchester. Kellogg packers separate plastic inner liner, carton or food waste into line-side Dolav plastic pallet bins. With these new Dolav containers, the non-food waste is now forklift-tipped into recycling skips. This has marked the end of compacting for landfill and closes the gap for Kellogg on reaching its target of zero landfill for food packaging waste by end this year. Kellogg sends any food waste to animal food production and has been recycling corrugated board waste for some time.

In just one year Kellogg has increased packaging waste recycling by a third from about 45 percent to more than 60 percent, soon to be 80 percent. Total waste is reduced by one quarter. Financial benefits come from reduced tonnage to landfill and less to pay in landfill taxes, up recently by £11 a tonne. By recycling Kellogg earns a rebate to offset its already reducing landfill tax.

With pallet bins key to recycling waste packaging, Kellogg's Environment Manager, Harry Almond, searched for a suitable product. “We wanted and found a Dolav pallet box strong enough to stand up to punishment by forklift drivers, who treat it as a waste bin. The Dolav, with strong runners underneath for tipping and made in tough, food-grade plastic, meets Kellogg’s food-quality standards,” he said. The Dolav Ace, introduced in 2008 especially for the food sector and for tough recycling environments, fitted the bill and is at work line-side with the UK’s best-known breakfast cereals.

Dolav in UK and Ireland:

Dolav pallets boxes have been sold in the UK and Ireland for more than thirty years. More than 400,000 have found homes in the meat, agricultural, chemical, pharmaceutical, recycling, engineering and assembly industries.

Globally: Dolav containers are used around the world in a wide variety of applications, including agriculture, industry, food processing, materials handling, transport and recycling.

The Dolav Company www.dolav.com is involved in the design, production and marketing of box pallets with a large volume capacity. Dolav is dedicated to providing its customers with advanced technological solutions tailored to their specific needs.