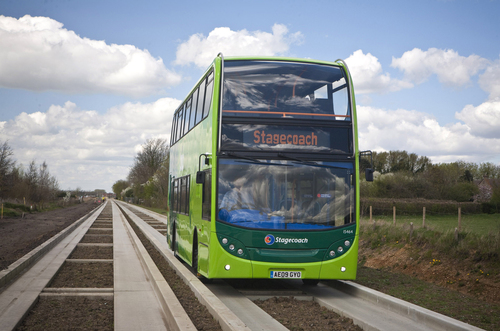 As part of a Government-funded £116m scheme to bring better transportation to Cambridgeshire, Stagecoach has launched a fleet of twenty new state-of-the-art vehicles to operate on the longest and greenest guided busway in the world. Commissioned by Cambridgeshire County Council, the 25km (16 mile) guided busway will provide a frequent, reliable, sustainable and attractive public transport alternative to driving between St Ives and Cambridge.

"This is a major investment by Stagecoach in a project that we believe will bring significant economic, transport and environmental benefits to the Cambridgeshire region," said Les Warneford, Managing Director of Stagecoach UK Bus. "The Cambridgeshire Guided Busway will improve access to jobs, education, healthcare and shopping for local people. By using 100% biofuel and equipping the vehicles with hi-spec features such as leather seats and Wi-Fi, we believe we will be able to attract current car users to a significantly greener, smarter travel option.”

Concurrently Stagecoach has invested over £3.5m in seventeen new Moovbox-equipped coaches on the X5 route servicing towns between Cambridge, Milton Keynes and Oxford. "The new coaches boast greener engines, leather seats, free Wi-Fi, power sockets, air-conditioning and access for wheelchair users", said Tony Cox, Managing Director of Stagecoach East. "Commuters will love the free Wi-Fi and power sockets, meaning they can start work as soon as they get on the coach."
In South Wales, Stagecoach has launched a new £2m fleet equipped with Wi-Fi Internet access to allow passengers to check their e-mails and surf the web. The seventeen ADL/MAN Enviro 300 buses hi-tech buses will operate the X4 service from Hereford to Cardiff via Abergavenny, Blaenau Gwent, Merthyr Tydfil and Pontypridd, with Internet access provided by the Icomera Moovbox available throughout the journey.

Established in 1999, Icomera is the world’s leading provider of cellular broadband gateways delivering Internet connectivity for passenger transport, public safety and enterprise applications. Icomera technology bridges wide-area cellular networks such as 3G/HSPA and WiMAX with local Wi-Fi and Ethernet access. Icomera’s award-winning Moovbox devices are deployed on rail, road and sea serving millions of Wi-Fi connections, and providing real-time high-speed access for fleet tracking and mission critical on-board systems. Icomera reported over 3.7 million sessions by over one million passengers in the twelve months to October 31st 2008 on its in-vehicle Moovbox systems worldwide, a 272% increase over the period. Icomera is headquartered in Sweden with offices in the United Kingdom and the United States, and channel partners worldwide.

Stagecoach Group is a leading international public transport group, with extensive operations in the UK, United States and Canada. The company employs 30,000 people, and operates bus, coach, rail, and tram services. Connecting communities in over 100 towns and cities in the UK, and running a fleet of around 7,000 buses and coaches, Stagecoach UK Bus is one of the largest operators in the country.