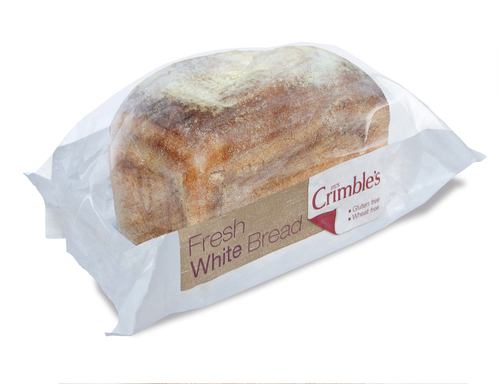 Following on from their recent success at the UK’s Free From Awards; Mrs Crimble’s, the UK’s fastest growing ‘Free From’ brand in the UK, has launched gluten free fresh white bread after years of meticulous development work.


‘Consumers have been asking us to produce a fresh bread that is free from gluten for some years now. Alas the technical issues have meant that until today we could not deliver the high quality product that has become synonymous with the Mrs Crimble’s name. After years of investing in new product development we can now launch a fresh bread that delivers the taste and quality that you would expect from the Mrs Crimble’s brand. It has gone into immediate national distribution with Sainsbury’s and many other stores to follow soon'


A tasty 400g Mrs Crimble’s fresh white loaf comes packed in a stylish wax laminated wrapper. The bread is uncut so consumers can decide exactly how to enjoy their fresh loaf. It is free from wheat and gluten and adheres to all the tight new EU guidelines on ‘Free From’ foods.


Marketing support includes free sampling at the 30+ food shows that Mrs Crimble’s is attending this year.


In addition over 10,000 personalised letters will be sent to known Mrs Crimble’s fans to tell them the good news. Plus the new ‘recommend a friend’ campaign will feature the bread heavily and encourage satisfied customers to ask for a free loaf to be sent to friends who they think would enjoy the new product. The website includes some great recipe ideas that suit the new fresh bread perfectly from dippy egg and soldiers right through to a traditional bread and butter pudding.


The bread will also see the first use of the Mrs Crimble’s ‘Moggy’, an old Morris Minor Traveller that has been branded in a traditional Mrs Crimble’s farmhouse style and will tour shows and UK journalists head offices letting people try a free ‘free from’ sandwich using the new loaves.


Mrs Crimble’s has now established itself as the UK’s key wheat and gluten free brand with many of its products now dairy free as well. It already boasts the top selling wheat and gluten free cake in the UK with its Mrs Crimble’s Large Choc macaroons and the brand took two National awards in the inaugural UK Free From Awards last year as well as the top snacks award this year.

The Mrs Crimble’s brand has now made successful moves into a number of categories with its ‘Free From’ offering including cakes, biscuits, corn and rice cakes, bread and cake mixes, baked snacks, fruit pies and savoury crackers.


For any information on the ‘free from’ consumer or the Mrs Crimble’s brand contact Gareth Eyles-Owen at RPPR on 01372-468448 or via e-mail gareth@redphoenixinfo.com.