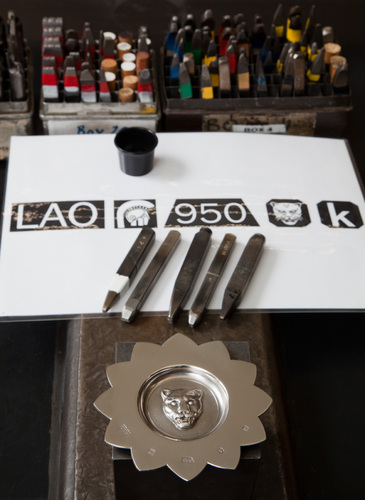 PALLADIUM RECEIVES ITS OWN HALLMARK
AND
OFFICIAL STAMP OF APPROVAL

London – July 23, 2009. The UK Hallmarking Act has now been amended by Parliament to incorporate palladium as a metal which requires hallmarking. Having finally received official recognition as a precious metal in its own right, compulsory hallmarking of palladium items weighing 1g or over will come into effect as of January 1, 2010.

Tom John was present to witness the hallmarking of his dish. “It was a proud moment and I feel extremely honoured that my dish was the first to be hallmarked in the Assay Office London with the new palladium hallmark.”

Described by bullion dealers Johnson Matthey as a “credit crunch beating metal”, palladium is not only competitively priced but has many advantages for the jewellery trade.

Palladium is a naturally white lustrous and tarnish resistant metal that offers a good alternative to low carat white alloys. In addition, being malleable and easily manipulated, it is particularly suited to the process of setting gemstones, machine forming and hand-making which makes it an ideal metal for designer-makers who focus on the bespoke market. Using palladium they can make larger more flamboyant pieces as palladium is much lighter than other platinum group metals.

Palladium has been used in the jewellery industry since 1939, although mainly as an alloy, notably to ‘whiten’ gold’s natural yellow colour closer to that of platinum. It was only in recent years with the steep rise in price of gold and platinum that Chinese jewellers began producing significant volumes of palladium jewellery. The interest has since spread westwards with a huge number of European and UK jewellers starting to appreciate the advantages of this “new” metal with its exciting potential for the jewellery industry.

Palladium has an atomic number of 46 and lies in the same vertical group of the periodic table as nickel and platinum. Like the latter, it is a noble metal exhibiting excellent corrosion resistance. Its appearance is naturally white and it is capable of being polished to give a bright lustre finish. It is considered a precious metal as it commands a value between that of silver and gold. With a value about a fifth and a density about half of that of platinum, an object of palladium would cost about ten times less than an equivalent sized object made of platinum.

The standards that will be available for the hallmarking of palladium are 500, 950 and 999. However, it is expected that 950 will be the most common standard requested.

A traditional symbol of the head of Pallas Athena, the Greek goddess of war, wisdom and craft will also be available. Palladium is named after the asteroid Pallas, which was discovered two years previously. Pallas Athena is an alternate name for the goddess Athena who in some mythologies is said to have adopted the name of Pallas after she was overcome with grief at having killed her friend of the same name.

The UK Hallmarking Act (1973) states that it is an offence for any person, in the course of trade or business, to describe an un-hallmarked article as being wholly or partly made of precious metal(s) or to supply un-hallmarked articles to which such a description is described.

There have been a number of amendments to the UK Hallmarking Act since 1973 but this is the first time since platinum that a new metal has been added.

This press release was distributed by ResponseSource Press Release Wire on behalf of The Goldsmiths Co. in the following categories: Business & Finance, for more information visit https://pressreleasewire.responsesource.com/about.