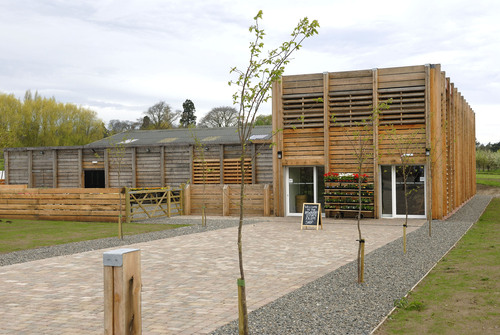 A farm shop in North Wales is the centre of an amazing success story that has seen it metamorphosise from a small fruit farm outlet to an acclaimed, award-winning temple for ‘real’ food, local produce and gastro delights – amazing since it has only been open for 18 months.

Hawarden Estate Farm Shop in Flintshire, North Wales, acclaimed in the Welsh food industry practically from the moment it opened it’s doors in March 2008, has now been recognised nationally as an elite food producer having being awarded a coveted 3-star gold award for its Welsh Beef and Black Beer Pies in the Great Taste Awards 2009 – one of only 83 products to be bestowed with that honour.

The Farm Shop has an interesting history. Descended from the small but successful Hawarden Castle Fruit Farm, established over twenty years ago, the new, modern food hall is the vision of Charles Gladstone, great great grandson of Prime Minister William Ewart Gladstone and is located on the Gladstone family’s Hawarden Estate in Flintshire, North Wales.

Following a key principle - ‘real food, sourced with passion’ - the hard work and dedication of the Farm Shop’s team has driven its meteoric rise since opening 18 months ago.

Crowned True Taste Retailer of the Year at the True Taste Wales Awards after only six months trading, the Farm Shop’s flair for sourcing and retailing quality speciality foods was very quickly recognised and acknowledged.

The quality of the Farm Shop’s in-house produce has also been previously recognised in Wales with a gold run at the North & South Wales Counties Awards for Innovation & Excellence in Meat Products where all six of the meat products it entered, including the Welsh Beef and Black Beer Pie, won the highest gold award.

The Hawarden Estate Farm Shop is now delighted to have received national recognition in such a high profile, prestigious competition.

Organised by the Guild of Fine Food, the Great Taste Awards are the acknowledged benchmark for speciality food and drink in the UK. A three-star gold is the highest level of award any producer can aspire to and is recognised as the definitive independent accreditation of quality. This year over 4,800 products were entered for the Great Taste Awards with 639 achieving 1-star, 308 achieving 2-stars, and only 83, including Hawarden Estate Farm Shop, achieving the coveted 3-stars.

This is exceptional given that the Farm Shop’s range of pies and rolls were only developed and launched in February this year as a result of a belief amongst the Farm Shop team that they could produce their own pies to the highest of standards. The 3-star gold Great Taste Award has certainly proved that this was a sound belief.

Made exclusively at the Farm Shop for the Farm Shop, its pie and roll range uses only the best quality ingredients, home grown wherever possible. The Welsh Beef and Black Beer Pie uses beef actually reared on the Hawarden Estate along with Welsh Black Beer from the region’s Great Orme Brewery. The pies have the wonderful flavour of real beer, a prime objective in their development.

The Great Taste Award is made even more special by the fact that only eight of the 3-star gold winners this year come from Wales. This is a fact that True Taste Wales has been quick to acknowledge by inviting each Welsh winner to automatically enter its ‘Speciality Product of the Year’ Award for 2009.

“We could not be more thrilled that our delicious Welsh Beef and Black Beer Pie has received the 3-star seal of approval! Our belief in real, quality food has been the driving force of the whole Farm Shop project and this belief has certainly been justified with an amazing 18 months.

“Even so, if you had told me when we launched in March 2008 that the Farm Shop would do so well so quickly then I would have thought you were talking pie in the sky. I can’t thank our wonderful team of staff enough – or all our customers. It is their support that has allowed us to turn Hawarden Estate Farm Shop into a shining example of how real food and local sourcing can bring a community together.”

The ethos of the Farm Shop is ‘real food, sourced with passion’. As well as fruit and vegetables grown on the farm the shop also sells produce from the estate’s tenant farmers, other local producers, and a selection of other UK suppliers all hand-picked because of the high quality of their products.

Visitors to the Hawarden Estate Farm Shop can also enjoy quality food in comfortable surroundings in the Cook Shop Cafe with outdoor terrace located within the farm shop. There are also activities for the whole family with a Nature Trail and children’s play area.