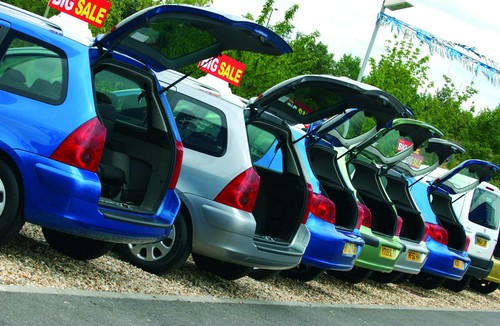 2008 was bad, but could have been much worse
says British Car Auction’s Used Car Market Report

• The private-to-private sector’s share of the used car market value rose by £1 billion to £7 billion from the sales of 2.69 million cars
• 42% of motorists surveyed do not plan to replace their car during the recession
• 15% have insufficient personal funds to replace their car with 12% concerned about rising motoring costs
• The environment was only considered important by 6% of used car buyers
• However, 38% plan to walk more often to reduce their personal motoring costs and 30% will both avoid short journeys and reduce car trips
• Public transport is seen as a cost-saving option for 22% of motorists
• 40% opted for a used car because they couldn’t afford new

Used car dealers lost £1.7 billion in used car revenues as 360,000 fewer used cars were retailed in 2008 compared to the previous year. This is the stark message from BCA’s 2009 Used Car Market Report, published on 1st August 2009.

Used car turnover for dealers fell to £24 billion - the lowest figure recorded since 2004 – as they sold 3.67 million used cars last year – a six year low. The losses could have been much greater, but for a change in mix towards the younger, higher-value vehicles that were retailed. This saw the average price of a used car sold by a dealer rise from £6,464 in 2007 to £6,641 in 2008.

Dealers also saw their new car market revenue fall from an all-time high of £33 billion in 2007 to £28.1 billion last year, as new car volumes dropped to their lowest point for 12 years and more car buyers opted for smaller, lower-priced models. In total, dealers combined turnover from car sales fell by an astonishing £6.6 billion in 2008 compared to the previous year.

Report author Peter Cooke commented “This year’s BCA Report shows a motor industry in recession; a recession that has hit the used car market and the new car market. However, this is perhaps different to any previous recession in that it is principally man made; created through a lack of credit for goods and services, rather than a lack of demand for products.

He continued “The combined market for new and used cars has dropped, even from the lower 2007 volumes reported last year. In 2008, the value of the used car market was some £4 billion higher than the new car market; a clear message that buyers will move from buying a new car to a used car in times of recession. Even so, the general slowing down in the velocity of business last year implies lower profit opportunities across the sector.”

Looking ahead, the Report suggests the drop in new car volumes means there will be a significant fall in the number of younger used cars coming to the market in the next two to three years – significantly less than the used car market would conventionally be able to absorb. The Report explores the implications in terms of used car shortages, price and, for franchised dealers in particular, a much smaller parc of younger cars for service and repairs.

The Report says a steady decline in used car volumes, particularly in the younger segments, will almost inevitably continue as the car parc shrinks and changes shape. This, in turn will mean used car retailers will need to seek to enhance their value added, and profitability per unit, if they are to remain economically viable.

A further phenomenon, partly caused by recession, is the growth in private-to-
private sales shown in this year’s report. While one might expect a growth in a ‘grey market’ in a period of recession, this throws the gauntlet down to the professional sellers in the field. What might used car retailers do to recoup their share of the market?

Elsewhere in the Report, BCA continues its benchmark consumer survey of motorists and their opinions on used cars and those that sell them. The survey – conducted by BMRB – ran in March 2009 based on interviews with 2,000 respondents, representative of the UK adult population aged 17 years and over.

The Report confirms that motorists remain unwavering about what they expect from a used car retailer when buying a used car. What they want is unsurprisingly straightforward – the ‘right car at the right price’, ‘a good deal’, ‘to trade in their old car’, ‘to deal locally’ and ‘with friendly, helpful and professional staff.’ The Report says franchised and non-franchised used car dealers who consistently meet these requirements, are well placed to attract and retain a growing number of used car customers.

The mix of used car sales was little changed this year, with hatchbacks sales accounting for 46% of the used car market, and saloons stable at 20% following last year’s fall from 24%. Sales of MPVs and micro/city cars both edged up one point to 8% and 3% of the market respectively.

However, the effect of the continuing economic turmoil was plain to see in the responses this year. Price, in the shape of being ‘unable to afford a new car’, is having an ever more powerful influence on buyers’ decision to choose a used car instead of a new one. Forty per cent of car owners in this year’s survey said ‘I couldn’t afford a new car’ was their foremost reason for buying used, 27% were confident that used cars represented ‘better value for money’, while 21% believe they are subject to ‘lower depreciation’.

Younger car buyers were clearly feeling the impact of the economic downturn at the time of the survey; three out of five 17-24 year-olds and half (48%) of car owners in the 25-34 year age group declaring they ‘couldn’t afford to buy a new car’ – in contrast just 23% of 65 years-plus motorists said they were in a similar position. This supports reports from various motor retail groups and organizations that older buyers have been far more active as new car buyers in recent months.

The proportion of motorists planning to buy a used car next time they change is 79%. However, the number of prospective buyers looking for a nearly-new car dropped to 9%; compared with 10% last year and 13% two years earlier. Slightly more men (80%) than women (78%) intend to buy a used car next time, while just two-thirds of car owners, in the 55-64 and 65 years-plus groups, plan
to do the same.

The current recession is arguably the worst for decades with an unparalleled impact on every area of the economy, leaving very few people untouched. Respondents to this year’s survey were asked how the recession would affect any decision to replace their car.

Forty percent of car owners said they ‘will not be changing their car’ during the economic downturn, 15% of motorists said ‘insufficient funds’ would play a part in their decision to buy or not, while a further 12% quoted ‘rising motoring costs’ was a factor they could not ignore.

Once again, people in the 17-24 year age group appear to be feeling the effects of the recession more than others, citing ‘insufficient personal funds’ (27%), ‘rising motoring costs’ (20%) and ‘lack of car finance’ (12%), as factors they might struggle with when changing their car. More 25-34 year-olds have already been ‘made redundant’ than other groups, while respondents in the 45-54 year group are more ‘worried about job security’ than others.

The Report is based on information from Omnicar, the Society of Motor Manufacturer and Traders, and other industry and trade bodies and was prepared by Professor Peter Cooke, the Centre for Automotive Management, University of Buckingham Business School. The Report also contains bespoke consumer research carried out by BMRB International on behalf of BCA. Fieldwork for this research was carried out during March 2009. It was based on interviews with a total of 2,000 respondents representative of the UK adult population aged 17 years and over.

For interviews or a copy of the full report please contact Maddy Roles, Louise Fowler or Wendy Harrison at HSL on 020 8977 9132. maddy@harrisonsadler.com