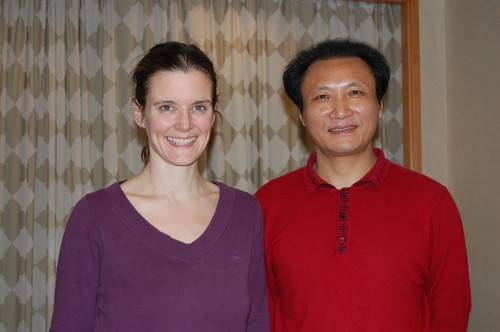 In the case of a tumour, he can take this solid thing and move it from a liquid state, into a gaseous state, and into a form of energy and then he can remove it

Master Shen Chang is a Chinese healer. Rather a special kind of healer, if one is to believe his three million followers in China and growing numbers of admirers around the world. According to them, and to some western, conventionally trained medical doctors, who say they have witnessed and verified his work, Master Shen Chang, 53, can remove tumours without surgery and can treat a wide range of illnesses and deformations by harnessing his own healing powers.

“Master Shen Chang practises Qigong, but I like to call it a kind of energy medicine,” says Dr Anthony Soyer, a New Zealand born doctor, trained in Australia, who now practises in London. Of course it is difficult for people to accept what he does without witnessing it themselves. But he does have the ability to remove tumours at any time and he is able and willing to do it in a medical environment where his work is monitored and tested by medical practitioners. I have seen him do it successfully.”

For those who would like to see his work for themselves, Master Shen will be giving a demonstration on September 1st at Friends House in London at the invitation of Masters Zhixing and Zhendi Wu of the Chinese Heritage Institute, organised by Seminars.ie. He intends to demonstrate his Qigong healing powers on various tangible conditions – easily visible lumps, fractures, deformations - among members of the audience, and he will attempt to teach participants how to harness their own healing energy through cultivating their own Qi, or source of energy.

Qigong is an ancient Chinese teaching practice which has been applied all over China, for over three thousand years, for the treatment of many different illnesses. It is little known in the West. Its fundamental aim is to harness the patient’s Qi in order to prevent and overcome illness, to improve physical and mental health and to realise an inner potential.

“His levels of energy are extraordinary,” says Soyer. “Through the force of his perception, through what he calls the third eye, he can see energy behind matter and he can direct the energy of his own body to re energise others. It is very difficult to explain exactly what he does. I don’t know exactly what he does, but he seems to put a high frequency vibration into the patient. In the case of a tumour, he can take this solid thing and move it from a liquid state, into a gaseous state, and into a form of energy and then he can remove it. Most of us are, in terms of sensory perception, at a very low level. He is at an extremely high level and he can somehow perceive the effect of his own energy. He can see it and calibrate it and then direct it to work on the energy of another person.”

Master Shen Chang is said to have completed clinical trials within China to validate his methods, but a search on Pubmed, however, the US National Library of Medicine online research archive that contains over 18 million links to medical journals, articles, medical libraries and medical databases, brings up no reference to Master Shen Chang nor to evidence of quality controlled trials related to his work.

Dr Daniel Peckham, a consultant in general medicine based in Leeds, says he would be open minded if a controlled study were to give clear evidence of what Master Shen does. “I do believe in mind over body. I believe that if the mind gives up, then the body will also give up. But I think it is fanciful that someone can physically remove something that is claimed to be a tumour without any evidence of scars or damage to the body. I would need to see a CT scan showing a hard nodule before treatment and then another scan following his treatment, to see what state it is in. I think it is highly unlikely that this can be done.”

Master Shen Chang claims three million followers from all over China. He teaches around the country and his many books and tapes have been sold widely. His research team is said to have documented over three thousand cases of successful treatment. “He has absolute certainty in his methods and his process,” says Soyer. “He is completely open when it comes to scientists and medically trained doctors observing his work. But he does say that, in the case of cancer, a tumour is the end manifestation of a condition, and that if you don’t change the genesis of the problem, or remove the root cause of the problem, the tumour will reappear.”

Master Shen Chang’s theories appear to challenge conventional beliefs in Western medicine. But he has been able to practise to date in China in an environment that is, because of the ancient acceptance of Qigong, open and willing to judge what he does on its results. “Chinese people are aware of the possibilities of Qigong and so Master Shen Chang has a willing audience in China. “It is important for Westerners to keep an open mind when it comes to these possibilities too,” says Margaret Miller, a practitioner of Qigong who has seen Master Shen Chang in action. “He does not guarantee that he will heal people, but the point is to be open to the possibilities. You do not have to believe in him to be treated. What matters is his knowledge and his energy.” It remains to be seen, on September 1st, to what extent Master Shen Chang’s work wins acceptance.