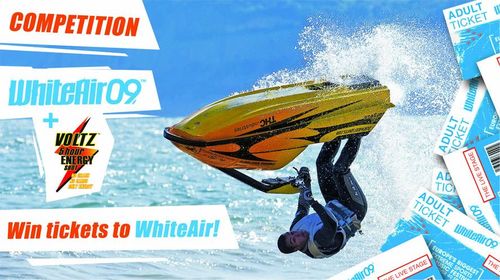 we have five sets of White Air tickets to give-away worth a total of £600!

Voltz Distribution UK, supplier of the popular ‘Voltz 5 hour energy shot’ health drink has today announced the details of a competition to win tickets to White Air 09 – Europe’s biggest extreme sports and music festival being held in Brighton in 18-20 September.

“Voltz has teamed up with White Air 09 as the exclusive energy shot sponsor to make sure energy and adrenaline levels are running at maximum velocity for the entire weekend.” confirms Rob Arnold, CEO Voltz Distribution UK. “As part of this, we have five sets of White Air tickets to give-away worth a total of £600!

“Entrants to the competition, simply need to submit a photo of themselves with a Voltz 5 hour energy shot drink in an extreme situation, whether that’s skateboarding, surfing or rock climbing – the name of the game is that anything goes!” explains Arnold. “Your coolest pictures need to be emailed to: wordup@voltzenergyshot.co.uk by 10 September or images can be uploaded via Facebook or sent in the post. Further details on how to enter can be found on our website: www.voltzenergyshot.co.uk/live”

Brighton Beach will also be the stage for critically acclaimed music bands including Doves, Biffy Clyro, The Cribs, White Lies, Natty, Boxer Rebellion, and hometown legends, British Sea Power alongside other established acts with more groups to be announced soon.

The Voltz 5 hour energy shot itself, first launched in May this year in the UK, is a new concept in the market and is made up of a combination of B Vitamins, amino acid and anti-oxidants. The concentrated bottle of energy does not contain carbohydrates and only supplies two calories, giving the consumer an energy boost without the sugar and high concentrations of caffeine.