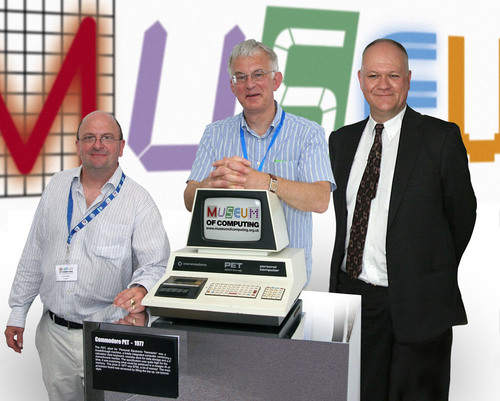 It’s very appropriate to open a Museum of Computing in Swindon, a town which has been at the forefront of technology since the days of Brunel

Swindon, United Kingdom – Eighteen months after it was forced to close by the withdrawal of the University of Bath from Swindon, the long-awaited re-opening of the UK’s first dedicated Museum of Computing takes place this Saturday, 8th August.

The main focus is on the paradigm shift over the last forty years that has seen computers become part of everyday life. As a major player in the industry and as the Museum’s main sponsors, Intel’s Vice President for Europe Middle East & Africa, Gordon Graylish, says 'It’s very appropriate to open a Museum of Computing in Swindon, a town which has been at the forefront of technology since the days of Brunel. We’re really happy to support it because it shows where the IT industry has come from and where it’s headed. We can all learn so much about how and why a new technology flourishes, if we understand what contributed to the success and failure of past inventions.’

One unusual item is the 1989 Nintendo Power Glove whose motion-controlled sensor technology never caught on to any great degree. However, once Nintendo resurrected this technology into the world-famous Nintendo Wii nearly two decades later, it has given them significant competitive edge.

Gaming enthusiasts can try out two Intel i7 based systems with the latest Extreme Quad Core processors running a network racing game in racing seats. Intel also displays the first full-size, real-life surfboard with an inbuilt tablet and touch- screen computer, used to promote Centrino and ‘Surfing the Web’ early this millennium.

Rare exhibits include a Science of Cambridge Mark 14 with a calculator style LED display, the first computer designed by Sir Clive Sinclair. The Museum of Computing loaned it to the BBC for filming ‘The Syntax Era; The Story of Early British Home Computing’ due to be screened in October. The programme covers the golden era of the 1980’s fight for the UK home computer market between Commodore, Atari, Amstrad, Sinclair and Acorn. It especially features rivalry between Sir Clive Sinclair (ZX and Spectrum), and Chris Curry, his protégé and former employee who headed up Acorn (BBC Micro). The Museum also shows the Amstrad 464; Lord Alan Sugar’s machine of the same era.

The Museum’s latest exhibition with hundreds of exhibits traces the evolution of computing beyond the mainframe; through desktop PCs at work and at home, portables, arcade games, games consoles, handhelds and mobile devices. The idea is that people should have fun and can revisit their mis-spent youth, as well as being reminded of our UK digital history. The popular ‘Pong to Playstation’ Zone allows visitors to try their hand at working vintage games consoles with Pong, Pacman, Sonic the Hedgehog, Super Mario Bros and Space Invaders.

‘Computers at Work’ star items are the IBM PC, which was widespread, and the Next Cube developed by Steve Jobs after he left Apple. This model was used by Tim Berners-Lee to develop the World Wide Web.

‘Computers on the Move’ highlights the miniaturisation of computer hardware with ‘luggables’ such as the 12kg Osborne, right down to a 1984 Psion Organiser 1 billed as the World’s first practical pocket computer.

Before being used for word-processing, computers were used for calculating vast amounts of numerical data. The Calculator Zone includes an HP 41, which had less computer power than today’s mobile phones and was the type NASA in its space shuttles. A 1910 Felt & Tarrant Comptometer has a keyboard unlike others. You pressed multiple keys to enter a number, making it faster to input data than modern calculators. Used until the 1970’s, comptometers were phased out when mainframes and mini computers flooded the workplace.

Run by volunteers, the Museum, which is twice the size of its previous venue, will initially open every Saturday from 9.30am to 5 pm. There is a classroom for talks, PC clinics, gaming events and school visits. See www.museumofcomputing.org.uk for event details, or email info@museumofcomputing.org.uk. With three car parks within fifty metres and on main bus routes, the Museum is in Swindon town centre at 6-7 Theatre Square, Swindon SN1 1QN, at the top of Regent Street opposite the new Central Library.

The Museum of Computing is a not for profit company limited by guarantee. There is no government funding to subsidise costs so admission fees are £7.00 for a family ticket for two adults and two children, £3.50 for adults, £3 for Students and Concessions (with proof of ID), children under 5 go free, and children age 6-15 yrs cost £2.50. All children under 14 must be accompanied by an adult. We welcome school parties, disabled visitors and groups by appointment (POA). Please telephone +44 (0) 1793 492256 for group bookings.